Have Packers Found the “Reel Deal”?

by Rob Born
in Uncategorized
15

Are Green Bay Packers fans in for some excitement over the next several years or what? Of course I’m talking about our rookie eye-popping running back.

The guy is a play maker, a game changer, a red zone zephyr. He has the ability to make a difference, to turn a game around, to apply the dagger to the heart of an opponent at any moment. Though he’s been given the ball more than five times in only four games, he’s already compiled a fabulous, and growing, highlight reel.

No, I’m not talking about coach Mike McCarthy’s choice as starting running back. The guy I’m talking about needs a nickname worthy of his talents, so I propose: Aaron “The Reel Deal” Jones.

Total Packers became smitten with the guy early on. We wrote about him on April 29 (The Book On Aaron Jones, Packers’ Fifth-Round Pick), on October 8 (Is Aaron Jones Now the Guy?), twice on October 10 (Breaking Down Aaron Jones’ Magnificent Game, and Packers Not Committing to Aaron Jones), on October 29 (Nothing Has Ever Stopped Aaron Jones – Except Injuries), on October 30 (Aaron Jones: An NFL Feel-Good Story), and even on December 3 (Can Aaron Jones Carry Green Bay To The Playoffs?).

If you’ve any doubt about Aaron being a human highlight reel, take a gander at the October 29th post. What Aaron has been doing in his brief NFL career is no different than what he did in high school or in college. The guy is not only explosive, but he has a knack for coming through against the toughest opponents — and in the most critical moments of a game. And this has been despite missing most of two college seasons and almost three weeks of NFL games due to injuries.

In high school, where he variously played running back, receiver, and defensive back, he once rushed for 335 yards in the regional playoffs against a team renowned for its stingy defense.

In his first game college game, playing for University of Texas at El Paso in 2013, he ran for 127 yards in just 11 carries and scored two TDs. Prior to an injury he was second in the country in rushing yards. He opened the 2014 season with 237 rushing yards and three TDs. Jones had six 100-plus yard games and six multiple-TD games that year. He opened the 2015 season with six catches and high 83 yards receiving at Arkansas. Though that season was all but wiped out by an injury, he still managed to establish a school record run of 91 yards. Then he opened the 2016 season a 249 yards rushing, three TD, and 292 all-purpose yards.

Some might quibble that UTEP was not a top-tier college. Okay, but you need to know that over his four years there he was the only talented offensive player on the team. UTEP was run-dependent rather than pass-proficient, and Jones often produced two-thirds or more of the team’s offensive yardage. Every defense Aaron faced was focused on one thing: limiting his output.

Though UTEP managed to have a winning record only once while Jones was there, the fact UTEP just finished 0-12 this year suggests how important Jones was to his team. To fans who came to watch him play in Sun Bowl Stadium, Aaron Jones is a legend.

The Wisdom of Mike McCarthy

Though coach Mike McCarthy started him off cautiously, in just his second pro game, at Dallas no less, Aaron went for 125 yards and a 6.6 average, and in his fourth game, against the Saints, he upped that to 131 yards, and a 7.7-yard average.

Jones was the difference in Green Bay’s thrilling win over the Cowboys — a game in which he outgained and outshone Ezekiel Elliott. He was named NFL rookie of the week twice in three weeks. Every person in Wisconsin was wildly excited and elated, except Big Mike, of course.

“I hope I have a 1-4 punch,” the coach said. “That’s why we drafted three running backs. It takes time. It’s a young man’s league, I get it, and Aaron had an opportunity he cashed in. I’m proud of him. He’s earned more opportunities moving forward. But this is not a one-man show.

Though Jones has demonstrated it has taken him no time to get up to speed in the NFL, McCarthy has remained true to his statement. In Jones’ last two injury-free games (against the Lions and the Bucs) McCarthy has seen fit to give him the ball a total of six times. Incomprehensible.

This is taking nothing away from Jamaal Williams, but even including his fine game on Sunday (21 for 113, 5.4 per carry, one touchdown), Williams is still averaging only 3.7 yards per rush. Jones is averaging 5.5 yards per rush, but maybe math wasn’t Big Mike’s focus when he played tight end at Baker University (see photo). It’s in Kansas. Baldwin City. 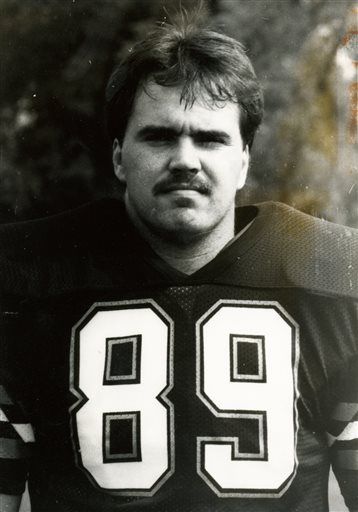 Aaron Jones has done everything you could ask of him on the field. I don’t recall any fumbles, any dropped passes, any missed assignments, any penalties. Every time he touches the ball he’s a threat to take it all the way. He’s the best sweep option the Packers have possessed since… who? Ahman Green? Ryan Grant? Dorsey Levens? Elijah Pitts? No, I think you’d have to go back to Paul Hornung.

Though his running style bears a resemblance to that of DuJuan Harris, he’s much more proficient. He’s clearly more talented than Randall Cobb when it comes to vision, quickness, and eluding tackles.

I’m not concerned about whether the NFL stage is too big for Aaron Jones. My concern is: will McCarthy squander the talent and potential of another late-round draft choice, as he has of Jeff Janis for the past four years?