Thankfully, the preseason is finally over with. It’s time to shape the 2017 Green Bay Packers 53-man roster.

The Packers and everyone else has to be at the 53-man limit on Saturday by 4 p.m. ET. Here’s who I’ve got making the team.

Sorry Taysom Hill, you played your ass off. I just don’t see the need for a third quarterback on this team. That roster spot should be used elsewhere. Hopefully, Hill makes it through to the practice squad.

Mays could be iffy, but I like the way he runs — over and through people. Plus, I’m going to give him the benefit of the doubt because he was a 2017 draft pick. The guy who’s out here is fullback Joe Kerridge, who was on the Packers active roster late in the 2016 season.

That’s right. I’m giving The People’s Champ, Jeff Janis another season. I really like Max McCaffrey, but I don’t think he makes it over a draft pick. Michael Clark is a nice prospect, but most likely destined for the practice squad. And finally, this position will get even more complicated after week 1. Geromino Allison returns from his suspension and someone else in this group likely has to go.

This is pretty much a no-brainer.

Jason Spriggs has been horrible this preseason, but he was a second-round pick last year. That guarantees he isn’t going anywhere. This is the position I could see the Packers adding some depth from outside the organization.

I like Brian Price over Christian Ringo, but the Packers may disagree. A wild card here might be Adams. He had foot surgery shortly after camp started. If you look at how cautious the Packers have been with Vince Biegel, an injury designation could be possible. That opens a roster spot for someone else.

My toughest cut is Reggie Gilbert. I really like nothing about Fackrell and Elliott. I just can’t see the Packers cutting either of them. Obviously, this puts Vince Biegel on the physically unable to perform list.

This looks like a pretty strong group. Of course, we said that last year too. I like Donatello Brown for a practice squad spot.

This will be the second year in a row the Packers have gone heavy on safeties to open the season. Those last three guys have great potential. 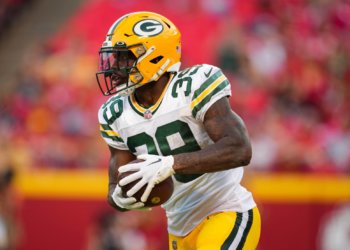