by Mordecai Jones
in Uncategorized
4

Frankly, we aren’t certain how official this is. Actually, it was qualified as unofficial, so it isn’t official at all. That said, if you look at the Green Bay Packers’ crappy website, you’ll see they haven’t updated their depth chart at all.

Christine Michael is still the third-string running back, backing up Ty Montgomery and… no one!

But the Press-Gazette went ahead and released a depth chart today. Did they get it from the Packers or did they make it up themselves? Hard to say with that operation.

What we can say is the Packers usually release their own “unofficial depth chart” at this point in time. So maybe they just gave it to the Press-Gazette this time around. Or maybe that fat bastard Ryan Wood just stole it from someone and ran to the office and said, “I’ve got the scoop of the century!”

If he did steal it, you know he’ll tweet about it 17 times between now and tomorrow morning and then block you on Twitter if you mention his incessant tweeting about the same goddam thing over and over.

I hear they call him Rapoport in the office.

Anyway, here’s that on the Packers’ site. 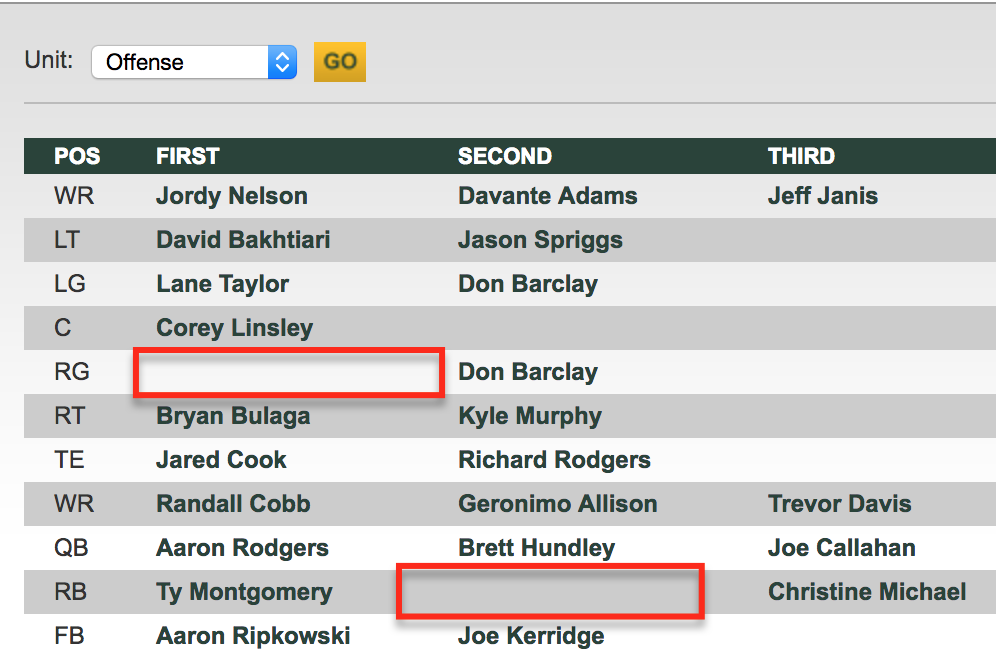 And then here’s this.

No real surprises on offense, but there are a couple on defense. 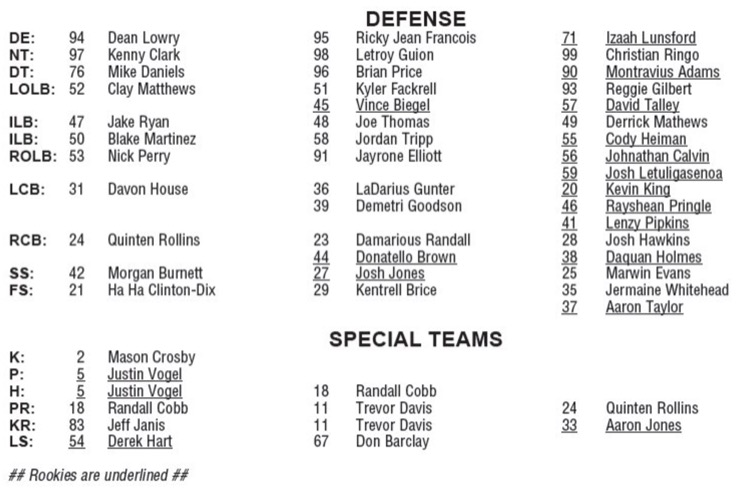 The surprises are at cornerback.

Certainly, the Packers are going to designate two starting cornerbacks, but they play the nickel so much, they really have three.

It’s somewhat of a surprise that Quinten Rollins is with the No. 1s. Rollins has supposedly outplayed everyone in camp, but we didn’t think he’d rise that fast.

The other surprise there is Kevin King is listed as third-team.

We fully expect Davon House and King to open the season as starters on the outside. The slot will come down to — it now appears — Damarious Randall and Rollins.

We gave Rollins no shot before camp and the Packers talked up Randall all offseason. But let’s be honest. Every indication is Rollins has outperformed Randall. At least thus far.

The Packers CAN play Rollins on the outside, but he’s better suited for the slot.

Ultimately, these depth charts skew things to a base defense. The Packers will predominantly use a nickel in 2017. Three corners and the first guy to come off will be an inside linebacker. The other inside linebacker might even be replaced with a safety — say, Josh Jones or Kentrell Brice.

Both of those players have shown they deserve a role.

King is going to be in the mix. House has probably hammered down a starter’s job. The toss-up is Rollins vs. Randall. And you have some indication of the way that’s going so far.