I mean, maybe the scumbag Chicago Bears are somehow not aware that the Green Bay Packers — especially in the Aaron Rodgers’ era — FUCKING OWN THEM!

Not quite sure how that could possibly be. Granted, that team rarely shows up for the damn game, but they do keep records of these things.

Those are QB1’s numbers against the Chicago Bears.

That doesn’t even take into account a certain NFC Championship game.

And yet, the Chicago Bears came out with this on Friday. 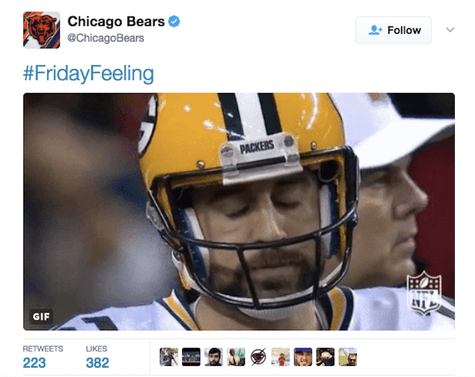 As you can see, that was a .gif of AR looking sad. Obviously, it was a reaction to the news that his relationship is over.

It was also a really bad idea. People who spend most of the hours in their day on social media blew the Bears up with Rodgers’ highlights, facts, stats, etc., etc.

And that’s probably why you can no longer find that Tweet online. Here’s where it was. Check and see if it’s there now.

So who’s the intern that got fired over this one? Want to come over to a winner?