by Mordecai Jones
in Uncategorized
15

I would say the answer is a resounding yes!

The Chicago Tribune ran the story on Aaron Rodgers and Olivia Munn breaking up today. However, their headline did not mention Rodgers by name, only as “boyfriend.” 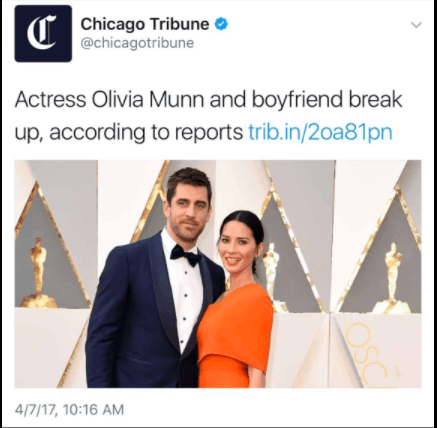 Referring to Rodgers as “boyfriend” is a pretty obvious and purposeful slight. After all, people who write for and edit that rag most certainly know who Aaron Rodgers is.

He’s the owner of the local football team, the Chicago Bears.

I would also argue that Rodgers is more well-known the Munn. While that’s debatable, he is certainly more accomplished.

She’s maybe been in one good thing: The Newsroom. He has two NFL MVPs and a Super Bowl MVP.

Three to one, baby!

We Called It: Aaron Rodgers and Olivia Munn Are Through!