The Book On The Packers’ Sixth & Seventh-Round Picks

The Green Bay Packers had one pick in round six and two in round seven to conclude the 2017 NFL Draft.

Frankly, I am exhausted and so we’re cramming all three of these guys into one post. Here’s who they are and what we know.

The Packers certainly could use some depth on the offensive line. They could also use a true backup center, now that J.C. Tretter is a Cleveland Brown. Corey Linsley has had his share of injuries. Amichia would appear to be that insurance policy. 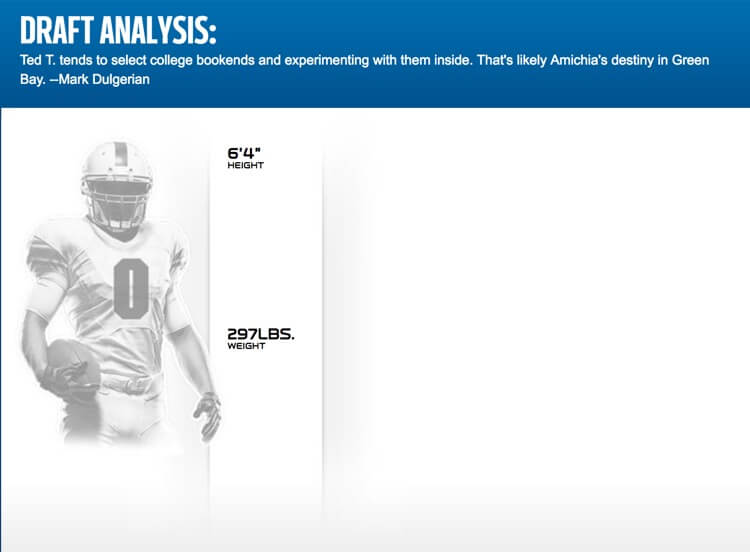 There’s his height and weight, but there’s no other information available on him via the league’s official site. There isn’t much info elsewhere either.

Essentially, another completely off-the-radar prospect that the Packers think they’ve unearthed. They were among five teams who showed interest at South Florida’s pro day. Amichia actually performed pretty well there, but you can see what the league thinks of him, since he wasn’t invited to the combine.

At least one of the draftees is going to have a tough time making the roster.

Regardless, Mays is a bull at 5’11”, 230 and despite that size and his muscular build, he ran a 4.5 40. The reasons he was sitting there in the seventh round is his 2016 season was limited to just 37 carries because of an ankle injury.

If he’s healthy, Mays has the ability to stick. The player isn’t similar, but this pick is similar to when the Packers drafted James Starks in round six back in 2010 after he had missed his senior season because of a shoulder injury.

Dupre is an athlete. He was a five-star recruit coming out of high school and won state championships in the high, triple and long jump. At 6’2″, 196, he has ideal size.

The numbers were never there at LSU, though.

Dupre caught 43 balls for 698 yards and six TDs in 2015. He caught 41 for 593 and three TDs in 2016. It seems most everyone blames Dupre’s lack of production on terrible quarterback play.

There may be some truth to that. If you watch Dupre, he’s the type of receiver who can go up and make a play on the ball.

If anybody can get the most of this guy, it’s Aaron Rodgers.