New York is Afraid of Aaron Rodgers and the Packers

The New York Post is known for their sensationalism, especially when it comes to celebrity gossip and sports. Thus, something like this isn’t totally surprising. What perhaps is surprising is the Post is suggesting that the big, bad New York Giants should be afraid of Aaron Rodgers and the little, old Green Bay Packers.

This is today’s back page. 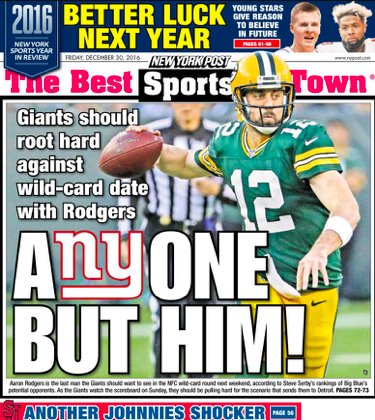 The Packers are currently set up as the fourth seed in the NFC. They’ll remain there if they beat Detroit to win the NFC North (unless Seattle loses, in which case they can move up to No. 3). That would mean a home date with the Giants, who the Packers beat 23-16 back on October 9.

If the Packers lose to Detroit, they will either be out of the playoffs or they’ll face Seattle or Atlanta, depending on what those teams do on Sunday. This depends on if Washington wins earlier in the day.

While you try to process all of that, the simple scenario is the Packers win and they play the Giants, which all of New York is probably now terrified of.

And they probably should be. When the Packers beat the Giants back in October, Rodgers was still playing very erratically. He’s an entirely different — and much better — quarterback right now.