by Vaden Todd
in Uncategorized
4 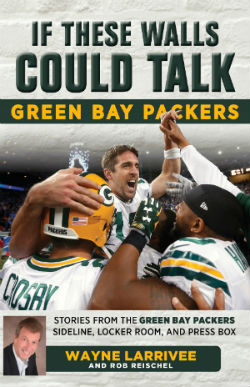 The 2016 season is starting to shape up like the 2010 season did for the Green Bay Packers. At least in one aspect — injuries.

That 2010 team went on to win the Super Bowl, of course. They did so almost despite themselves. The 2010 team was disappointing for stretches during that season, including a 3-3 start and a 7-3 loss at Detroit, which had to be the low point of the season and dropped the Packers to 8-5. The Packers also lost Aaron Rodgers to a concussion during that loss. He would sit out the following week’s loss to New England.

It was at that point that Mike McCarthy delivered one of his few great moments as coach of the Packers.

This excerpt from If These Walls Could Talk: Green Bay Packers: Stories from the Green Bay Packers Sideline, Locker Room, and Press Box by Wayne Larrivee and Rob Reischel is printed with the permission of Triumph Books. For more information please visit www.triumphbooks.com/wallspackers.

Late in that 2010 season, with a number of players lost to injury, McCarthy knew he needed to inject confidence in those who were still healthy enough to play. He used actions and words to instill confidence in a team at its lowest ebb.

It was December 15, 2010, and the Packers were in crisis mode. Green Bay had just lost in Detroit 7–3 in arguably its worst performance of McCarthy’s five-year tenure. The loss left the Packers at 8–5—two games behind NFC North–leading Chicago, and in a fight for their playoff lives.

Aaron Rodgers, who left the Lions game with a concussion late in the second quarter, was listed as doubtful the following week. Deep down, though, McCarthy knew he wouldn’t have Rodgers, a player who had quickly developed into one of football’s elite signal callers.

To top it off, Green Bay was facing its toughest test of the year, a Sunday night road tilt at AFC power New England. The Patriots entered the contest having won 10 of 11 games, had the NFL’s soon-to-be MVP in quarterback Tom Brady, and were averaging a league-high 31.9 points per game.

McCarthy was also facing growing concerns from the paying customers. In the nearly three seasons since Brett Favre had been traded, the Packers were 25–20 and hadn’t won a single playoff game.

In many places, that record would be just fine. But in the NFL’s smallest city—affectionately known as Titletown thanks to its 13 World Championships—McCarthy and his program were at a fork in the road.

Now, all McCarthy had to do was go into New England without his best player and face football’s finest team. To the oddsmakers, who installed the Patriots as 14-point favorites, the Packers were entering a gun fight with only a few pebbles.

For five years, McCarthy had been cooperative each time he met with the local media. McCarthy was always extremely positive, using that word so often that many referred to him as Mike McPositive.

McCarthy aimed to find the good in most situations, which meant he rarely made headlines with his words. His answers were sometimes generic. He was guarded, protective, cautious.

But on this Wednesday afternoon, four days before Green Bay met the Patriots, McCarthy dramatically changed his approach. Instead of dishing out vanilla, McCarthy went for a scoop of Cherry Garcia.

And everyone took notice.

“We’re nobody’s underdog,” McCarthy bellowed when he was asked about facing the mighty New England Patriots. “We have all the confidence in our abilities. We’ve had challenges throughout the season. We’ve stepped up to those challenges, and we feel the same way going into this game.”

McCarthy, continuing his bold, new approach, deferred after the Packers won the opening toss. Then McCarthy opened the game with an onside kick, which the Packers recovered.

Backup quarterback Matt Flynn threw for three touchdowns and 251 yards. The Packers held the high-powered Patriots to 249 total yards and had nearly twice as many first downs as New England.

But a pair of critical Green Bay turnovers and some special teams breakdowns allowed New England to escape with a 31–27 win. Afterward, though, something had changed inside Green Bay’s locker room.

There was a restored confidence. There was a belief and a certainty that had been missing for weeks now.

The Packers entered 2010 talking about a Super Bowl title, but had disappointed many with a 3–3 start and an 8–5 record heading to New England. But McCarthy’s “nobody’s underdog” comment seemed to reenergize and rally his team—even though the mighty Patriots prevailed that night.

“There’s no doubt about it,” (Ryan) Pickett said. “New England wasn’t just a good team, they were a great team. And when coach called us ‘nobody’s underdogs,’ it seemed to fire everybody up a little bit.

“If guys kind of needed a jolt, that was it. We knew we had a great team, but I know people were starting to doubt us, too. I guess it was time to show we weren’t anybody’s underdog and that’s what we went and did.”

The Packers had a renewed sense of confidence, thanks in part to the actions of their head coach, who showed an unwavering belief in them.
Later that postseason, McCarthy pulled another stunner.

On Saturday night, less than 24 hours before Super Bowl XLV, McCarthy made the bold move of fitting his players for the championship rings. Traditionally, teams get fitted after winning a title. But the McCarthy Way was now much different than many of his peers.

“I felt the measurement of the rings—the timing of it would be special,” McCarthy said. “It would have a significant effect on our players doing it the night before the game.

“I just told them, ‘We’re going to get measured for rings tonight.’ Scheduling is so important during the course of the week. You want to do certain things at certain times. I thought that was a perfect time. I thought it would be special and give us a boost of confidence to do it the night before the game.”

The Packers’ confidence was sky high. And it was a big reason Green Bay defeated Pittsburgh 31–25 in the 45th Super Bowl the following night.

You can get the book on Amazon now. Just click the image.