Color Rush: When the Green and Gold Fade to White

As most are undoubtedly already aware, the Green Bay Packers and Chicago Bears will be donning their so-called color rush uniforms on Thursday night.

With both teams playing horribly, at least we could have enjoyed seeing two of the best uniforms in the league as part and parcel of the oldest rivalry in the NFL.

Color Rush celebrates what Thursday night is and what football will become. Faster. Bolder. More electrifying. It’s tradition amplified, passion elevated and performance ignited. It’s brighter than ever and shows out like never before. Color Rush is NFL’s and the Nike’s vision for the future.

As is often true with much of the propaganda from both the Packers’ front office and the NFL front office to which the Packers and every team is subordinated and bound to by league charter, every word in that sentence is either nonsensical bullshit or is just flat out false.

“Color Rush celebrates what Thursday night is and what football will become.” What does that even mean?

And with falling ratings particularly dreadful on Thursday Nights, talk of the future of football could be ironically true. Mark Cuban talking of pigs getting slaughtered comes quickly to mind.

Tradition amplified, passion elevated, performance ignited? No, given that the Packers have played in some variation of their home green jersey and gold pants ensemble for some 55 years or so, this is tradition DEFILED. 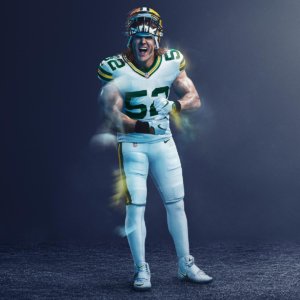 Still, given that the Packers were originally slated to play in all gold, it could be worse. Far worse. Instead of the Packers, the team could look like the Green Bay Highlight Markers. After perusal of various depictions, I am reminded of Alex DeLarge and his gang of Droogs from A Clockwork Orange, sans the boots, derbies and underwear worn over the pants. 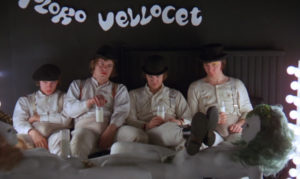 All white athletic pants and jerseys might also be associated with men’s long winter underwear. Nothing about these Color Rush getups conjures associations of an NFL team, however.

And while these do not too look too bad objectively, this mandate handed down by the League — in consortium with Phil Knight and Nike — are a flagrant and striking abrogation from one of the very hallmarks that define the Green Bay Packers: history and tradition of excellence.

Part of that tradition and history is wearing the Green and Gold at home in essentially the same guise since the Days of Lombardi, with just a few small variations over the years. While admittedly also money-grabbing ploys to sell alternative jerseys, prior aberrations, while ugly, were nods to the years before the modern look formed during the early, heady days of the Lombardi dynasty.

Not so with these. And in this way, because the Packers front office succumbed to this mandate with hardly any fight at all, this aberration also represents far less commitment to this tradition and history than in years past and far less commitment to tradition and history than any Green Bay Packers’ front office ought to uphold. And so, on top of a quickly disintegrating Aaron Rodgers, an offensive unit in complete disarray, and crippling injury met with more impending injuries, supporters of the Green and Gold have yet more to fret about.