Well, I almost shit myself when Blake Martinez decided he was going to wear No. 50 right after he showed up in Green Bay. Because you know who wore No. 50…

Of course you do! All-around fine human being, but completely terrible inside linebacker A.J. Hawk — the bane of my football existence for way too many years. I just figured, you put on the number and you immediately become a guy who jumps on piles, gets burned in coverage, buried by linemen, takes terrible angles and so on and so forth.

Well, Martinez — at least thus far — has been a pleasant surprise. If he keeps it up, he may just redeem the No. 50.

Although he didn’t play a ton in week 3, Martinez had himself a nasty cut across his nose. It’s the kind of thing that doesn’t go away as long as you’re wearing a football helmet on a regular basis.

And that brings me to this. Blake Martinez is no longer A.J. Hawk. Who is he? 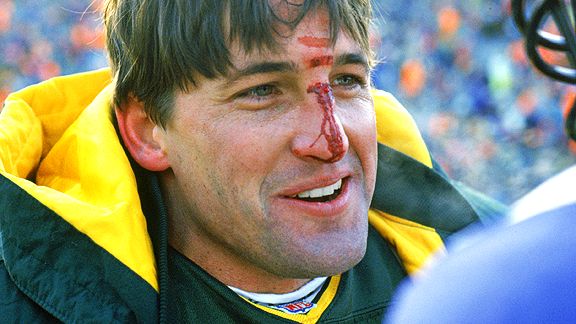 Chuck Cecil. The hardest-hitting motherfucker to ever roam the Green Bay Packers secondary. That prick Ha Ha Clinton-Dix should watch some tape of this guy.

Anyway, Cecil seemingly always had that cut and blood running down his face when he was on the field. For part of Cecil’s Packers career (1988-92) there were no byes. Those were reintroduced in 1990, so you played 16 consecutive before that. There was no time to heal, such as Martinez has now.

Let’s hope when he returns from the bye, Martinez plays more like Chuck Cecil and doesn’t start reminding us of A.J. Hawk.