U.S. Bank Stadium, which you will know as The Hormel Chili Dome, will have a ribbon-cutting today. That brings to mind the good old days at the Hubert H. Humphrey Metrodome — the nation’s biggest water park.

Completed on the same plot in 1981, you might say the Metrodome was built on the cheap. It had an air-supported roof that suffered significant damage due to heavy snow or bad weather five separate times. The final indignity happened in December 2010 — let’s call it Deflategate I.

Fox Sports was setting up for the next day’s game against the Giants, when someone noticed water dripping from the ceiling onto the field. The network kept its cameras trained on the roof all night and recorded the scene at 5 a.m. the next morning, when three large roof panels gave way, releasing a deluge of snow and water onto the field.

The game, whose start time was less than 12 hours away, ended up being played in Detroit a few days later. Tickets were free as befits a Viking game. The Vikings lost, which was even more perfect.

The entire roof was eventually replaced, but Viking pride, such as it is, was forever hurt. So that shithole of a stadium was shut down for good in 2013.

The Vikings have played the last two years at TCF Bank Stadium, on the University of Minnesota campus.

Fitting, because if the NFL ever had a college-level team, it’s certainly the Minnesota Vikings.

In an effort to stimulate a fleeting moment of glory, The Vikings are scheduled to play their first game in their new digs on September 18. The Sunday night NFL game features the visiting Green Bay Packers, who at least should not be distracted by looking up to see if the roof is holding up.

The new place features a fixed roof. Though hard to believe, this is the first new NFL fixed-roof stadium since Ford Field was completed in 2002. Due to the cost of constructing a real roof, Minnesotans obviously had no funds left over to hire design consultants.

Just look at this monstrosity. 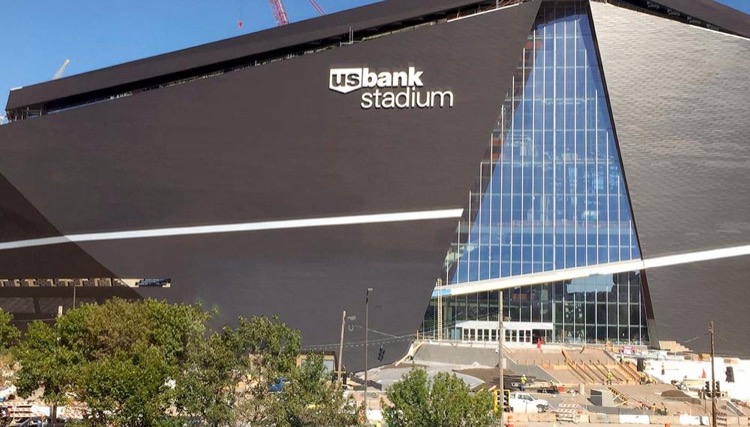 An ode to Hormel Fucking Chili by a bunch of sheep-fucking, Hamm’s-swilling, chili-stained, wife-beating motherfuckers if we’ve even seen one!

[Ed note: last line — all Monty, who we can summon out of retirement at any moment with five words. “Want to bash the Queens?”]