History May Tell Us How Much Eddie Lacy Should Weigh

Green Bay Packers running back Eddie Lacy has a weight problem. Or does he?

We know the Packers aren’t happy with Lacy’s weight, but he’s still productive when given the opportunity to run the football. The evidence there is in his 4.1 yards per carry average in 2015. That’s the same average he had as a rookie, when he ran for 1,178 yards and 11 touchdowns.

But we’re not wondering if Lacy can be productive. He seemingly can be productive even when he’s overweight. We’re wondering what his optimal weight is. Not what the Packers think he should weigh, but what other running backs with frame’s like Lacy’s have performed well at.

Among the 70 successful running backs on these two lists, surprisingly few are big and bulky men.

Anyone 6’1” or taller is not a good comparator to Lacy, whose more precise height is believed to be 5’10 1/2”. Players like Jennings, Harris, Riggins, George and Czonka can carry from 230 to 240 pounds fairly comfortably on their tall frames.

By eliminating the above guys, we are left with five hulks: Jonathan Stewart, LeGarrette Blount, Jerome Bettis, Earl Campbell and Lacy.

Who is most comparable to Lacy and what might these players tell us about ideal running back weights? 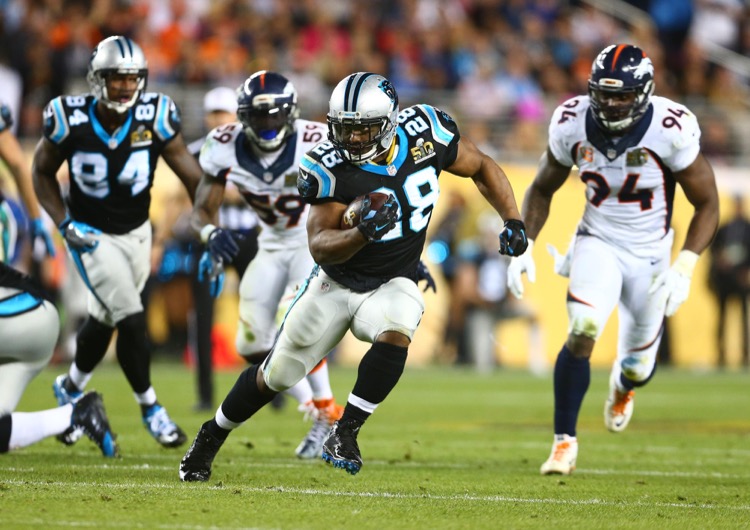 The player most comparable (weight and height) to the slim version of Lacy (currently listed at 234) is Jonathan Stewart.

Carolina drafted the 5’10” 235-pound Stewart 13th overall in 2008. For most of his eight-year career he’s been paired with 5’9” DeAngelo Williams — “Smash and Dash.” Williams, who is now with the Steelers, got the best of the deal in Carolina with more starts, more carries and higher per yard rushing (4.8 vs. 4.5) and receiving average (9.1 vs. 8.1). Stewart has had only one 1,000-yard season and he’s averaged only 15 catches per year. In Super Bowl 50, Stewart was a non-factor, with 29 rushing yards on 12 carries. Stewart does have a bruising running style similar to Lacy’s and he’s often among league leaders in breaking tackles.

Comments: As good as this high draft pick’s potential was, Stewart has achieved only average results in the NFL. His best season was 2015, when he earned his only Pro Bowl nod and was a second-team All Pro. Stewart most likely plays overweight for his 5’10” frame. Stewart is faster (4.46 vs. 4.57 in the 40-yard dash) and generally more athletic than Lacy. However, Slim Lacy — the Lacy of 2013 and 2014 — has already outperformed Stewart, twice rushing for over 1,100 yards. As a rookie, Slim Lacy was a Pro Bowler and second-team All Pro. He has performed very well, both as a runner and a passer — his 42 catches for 427 yards in 2014 show what he can achieve when not overweight. 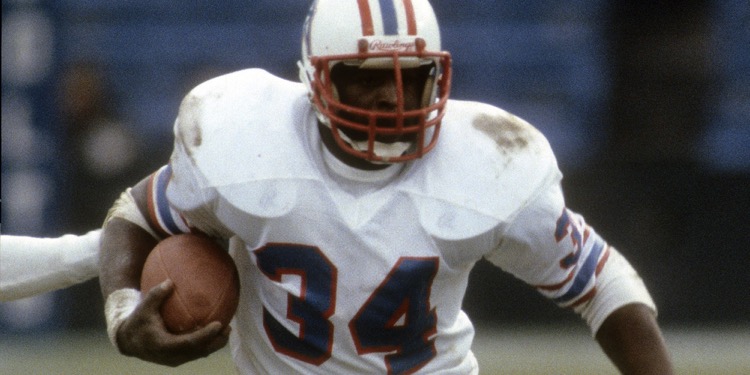 If Lacy can stay at no more than 245 pounds, comparisons can be made to Houston Oilers great Earl Campbell, a Heisman Trophy winner and the first overall draft choice in 1978. He is known as one of the best power running backs of all time, he’s in the Pro Football Hall of Fame, and he’s won a slew of awards (Offensive Player of the Year, league MVP three straight years, etc.). Campbell went over 1,000 yards rushing five times and he ran for a then-record of 1,934 yards (in 15 games) in 1980.

Campbell ran over and through players. His running style was like Lacy’s, but more so. He was one of the most feared tackle-breakers in league history.

He also lasted only eight seasons in the pros and missed a total of 27 games in his last four years. Most people attribute the lack of longevity to his running style.

When asked if Campbell was in a class by himself, his coach, Bum Phillips, replied, “I dunno. But if he ain’t, it don’t take long to call the roll.”

Comments: Though Campbell proved beyond doubt that one can excel at 5’11” and 245 pounds, Lacy does not possess the extraordinary athleticism of this all-time great. It’s also a stretch to compare Lacy with a No. 1 draft pick and Heisman winner. Though Campbell had height and weight similar to a 245-pound Lacy, the two don’t otherwise possess quite the same skill set. 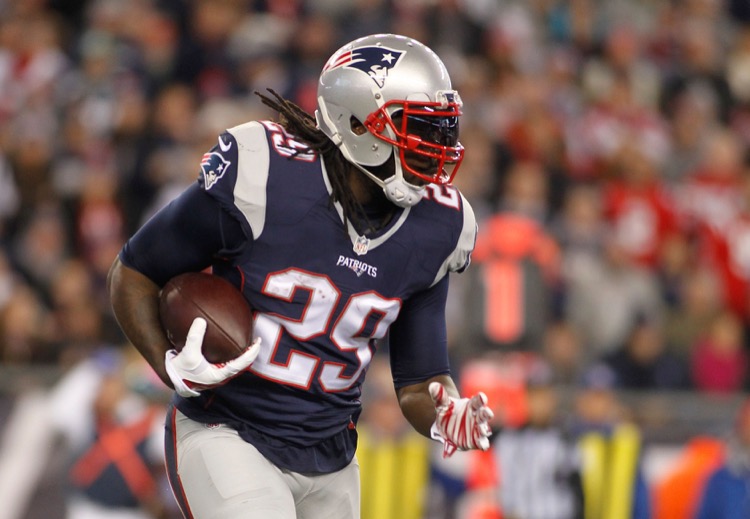 Though listed at 234, Lacy appeared to most observers to weight at least 250 in 2015. If so, the most comparable backs to Fat Lacy would be Blount and Bettis.

LeGarrette Blount, who went undrafted in 2010, has bounced around in his seven years in the league. He’s been with the Buccaneers, Patriots and Steelers, and now he’s back with the Patriots after being released by the Steelers last year. He has only one 1,000-yard rushing season (his first year), has played in all 16 games only once, and has only 39 pass receptions in his career. His career rushing average is a very solid 4.6 yards.

Comments: The 6-foot-tall Blount has not prospered in the NFL at 250 pounds. He’s overweight, overly bulky and often injured. 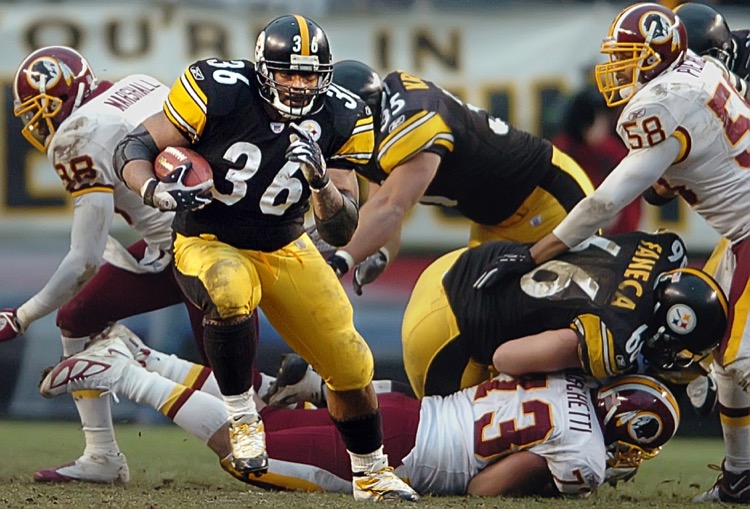 You’d think that Bettis proves that a 5’11” running back can be upwards of 250 pounds and still have a brilliant career. Well, sort of.

Bettis was listed at 255 pounds toward the end of his career, but he clearly often played at least five to 10 pounds more than that. His 13,662 yards places him sixth on the all-time rushing list.

That looks nice on the surface. On closer inspection, Bettis owes much of his production to longevity, good health and being a workhorse.

Though he had eight 1,000-yard rushing seasons, he had between 299 to 375 carries in six of those. Over his 13 seasons, Bettis’ average gain was only 3.9 yards. That’s less than Lacy’s 4.3-yard career average. Lacy has also averaged just 239 carries per year.

Bettis caught 200 passes, but that only works out to 15 receptions per season — unacceptable in the Packers’ pass-oriented offense.

Unlike most big running backs, “The Bus” mostly avoided serious injury. He played in at least 15 games in 10 of his 13 seasons. When he was inducted into the Hall of Fame last year, he was saluted as the most prolific big back in NFL history.

Comments: Bettis proves that it is possible to perform well at 5’11” and around 260 pounds. But he is also the only player of such size with anywhere near these accomplishments. Until Lacy matches that output, or some other big body does, Bettis can be considered one of a kind. Still, his low yards per carry average and unimpressive receiving stats indicate that his weight was far from optimal.

What These Profiles Suggest

If Eddie Lacy can maintain his weight at no more than 230 pounds, he should match or exceed his fine performances from 2013 and 2014. His ideal playing weight is probably from 225 to 230 pounds.

If Lacy plays at around 245 pounds, he’s probably destined to have a poor rushing average, inferior receiving statistics (like his 20 catches in 2015), and an injury-riddled and short career.

If Lacy plays at 250 pounds or more, the likelihood is for a LeGarrette Blount-like career. No more 1,000-yard seasons, increasingly ignored as a receiver, not worth a big contract and likely to become an NFL journeyman.

Lacy is in the final year of his rookie contract, so his fitness — and subsequently his performance — in 2016 will determine his future career path with the Packers and in the NFL.

Your Latest Proof the Detroit Lions Are a Joke