Jared Allen certainly isn’t the guy we’d expect to show up with the sensible advice. Yet, that hillbilly is exactly the person who did so when the Minnesota Vikings were courting Brett Favre to come out of retirement.

During the summer of 2009, the Vikings sent owner Zygi Wilf’s (Groucho, you fuck!) private plane to Mississippi to woo Favre. Brett had “retired,” after a season with the New York Jets, but hadn’t officially sent his retirement papers to the league. The expedition included Allen, offensive lineman Steve Hutchinson and kicker Ryan Longwell, now and forever a Minnesota Viking.

Allen told Favre to stay where he was.

“I used that (trip) to get out of training camp for a few days,” Allen told A.J. Hawk on his podcast.

“Hutch and Longwell put the pressure on him,” Allen said. “I was like, ‘Listen, dude. It looks like you got it pretty good down here.’ His place is amazing. I’m like, ‘I’m going to be real honest with ya. If I’m you, I stay retired.’ But I’m like, ‘Don’t come back thinking you gotta prove something. If you want to come back and have fun with us and try to win some football games, do it. If not, I might retire and move down here.'”

Yeah, and we all know how that played out. 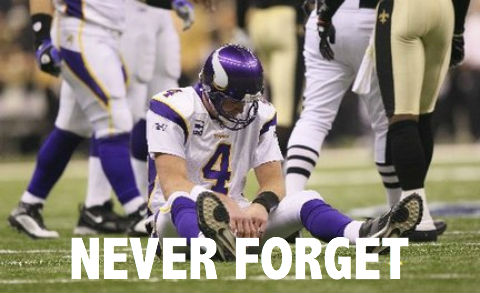 Favre’s ego got in the way, he came back and had one amazing year with the Vikings, followed by one horrible year.

The 2009 season featured two Favre victories over the Green Bay Packers, but ultimately ended with Favre being Favre and chucking an ill-advised pick in the playoffs that ended the run.

Let this be a lesson to everyone out there. Even if you’re Brett Fucking Favre, you cannot take the scum of the earth Minnesota Vikings to the promised land.

They are and will always remain the Minnesota Vikings.

Previous Article
How Have Recent Packers Castoffs Fared?
Next Article
Should Packers Resort to Kicking High and Short?