Packers’ Salary Cap Situation Ain’t What It Used To Be 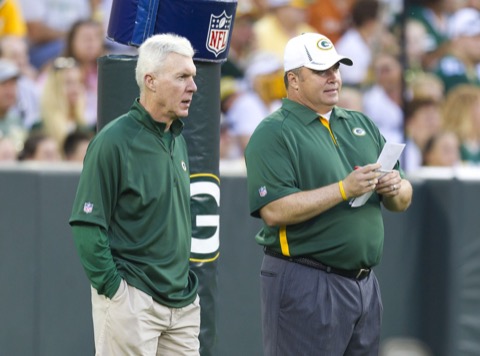 The Green Bay Packers have always managed the salary cap deftly, but like the old gray mare, she ain’t what she used to be.

The Packers currently have slightly over $10.6 million in salary cap space with their draft class still to sign. Their rookie salary pool is slightly over $5.3 million. So if you do some quick subtraction there, you can see the Packers will be left with around $5.3 million once everyone is under contract.

That will be about half of what the organization had to work with in 2015.

Ultimately, the numbers will work out to be something a bit different. During the offseason, only the team’s top 51 salaries are counted for salary cap purposes, so that $5.3 million under the cap number isn’t calculated in such a simple manner and thus, isn’t exact. In fact, the Journal Sentinel says the offseason number will actually be around $9 million.

That’s really not an important number, though.

Once the regular season begins, then all of the team’s players’ salaries and bonuses are counted against the cap. That includes guys on injured reserve and the practice squad.

Since we don’t know exactly who’s going to make the roster, we can’t give you the Packers’ exact 2016 salary cap number.

This number — the regular season number — is the important one.

What we can see is the amount of cap space the Packers will have to work with is almost certain to be lower than it typically is. Entering the 2015 season, the Packers had more than $11 million in salary cap space available. Entering 2014, they had $8.5 million available. Back in 2013, they had around $14 million.

Why is this significant?

The Packers are entering a season in which a long list of players will be playing out the final year of their contracts. Some of those players are stalwarts, like Josh Sitton, T.J. Lang, Eddie Lacy and David Bakhtiari. Others are valuable role players, like J.C. Tretter and Nick Perry.

And what if someone who hasn’t played that well before suddenly finds his groove? We’d bet former first-round pick Datone Jones ends up falling into that category now that he’s a full-time outside linebacker.

Simply, the Packers are going to have a lot of guys they’d like to pay and they’re not going to be able to pay all of them.

They’ll have very little wiggle room to give anyone an extension before or during the season. This tactic is used by teams so they can count part of a player’s signing bonus on the current year’s salary cap, thus creating more room in future years.

That’s not to say that it can’t happen. It just looks like it will be tough.

Fortunately, there’s relief on the horizon. Several big-money contracts will come off the books in 2017, including those of Julius Peppers, Sitton and Lang.

Those three deals alone will create a little over $23.4 million in cap space. You can see where this is going, though.

Keeping that cap space means those three guys are done in Green Bay.