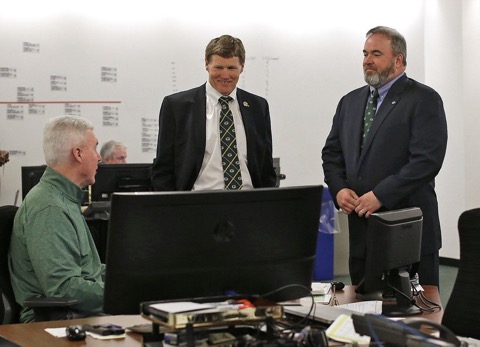 We’ve seen it around the NFL over the years. Coaches demanding control over personnel.

The example that comes immediately to mind is the recent debacle in Philadelphia. The Eagles gave coach Chip Kelly control over personnel in 2015, he almost completely remade the roster, the Eagles finished 7-9 and Kelly got canned.

It’s hard to realize your vision of an NFL roster in one year. Of course, it’s hard to do the job of two men, as well.

At the moment, only two coaches have control over personnel. Seattle’s Pete Carroll shares control with general manager John Schneider, who seems to be on the exact same page as him. In New England, Bill Belichick does it all.

Those two successful operations are exceptions to the rule. One we’ve seen play out with Kelly, Lovie Smith in Tampa, Josh McDaniels in Denver and so on.

We’ve seen this play out in Green Bay before too and we’re not referring to the years when coach and general manager were one job, which was the case up until Lindy Infante took over the Packers in 1988.

We saw Mike Holmgren leave town for Seattle in 1999 because the Seahawks gave him what he always wanted — a dual role as coach and general manager.

That lasted through the 2002 season, when the Seahawks canned Holmgren the general manager, but let Holmgren the coach keep his job.

We also saw the Packers hand the dual role — ironically, since that’s what Holmgren wanted — to coach Mike Sherman in 2001. Sherman replaced Ron Wolf, who was retiring, as general manager.

That lasted until 2005, when the Packers finally realized Sherman was spread too thin. Although he had plenty of success as a coach, Sherman was a terrible general manager.

Thankfully, Mike McCarthy wants nothing to do with personnel. He just wants to coach his football team.

“In my opinion, for as much time as I and the coaching staff put into coaching the team, I don’t know how you could run a draft the way it needs to be ran and also run a football team,” said McCarthy. “I don’t think it’s feasible. I know I would be cheating one job that I’ve done forever, and [to] try to do both, I don’t think you can do it to that level.”

Do you know anyone who has two full-time jobs? And if by some slight chance you do, do they actually do both of those jobs well?

One person can’t effectively do both jobs in today’s NFL, unless you’re the evil genius Bill Belichick. That has been proven time and again.

Yet, you always see McCarthy in photos of the Packers’ draft room. What is he doing there?

He says he’s just supporting the personnel department and adding to the conversation when he’s asked. He makes nothing resembling a decision.

Except for which donuts to eat and how many of them to consume.

Lay off that bear claw. That one says “head coach” on it!