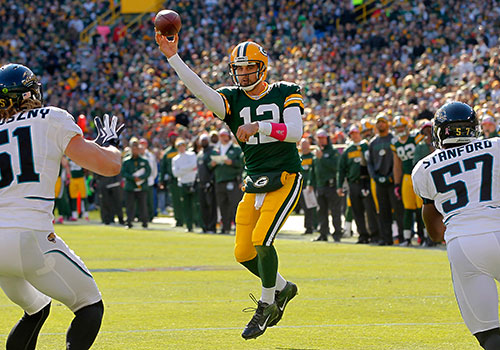 The complete season schedule has been unveiled by the NFL. So we now know when the Packers will be playing. The who and where we already knew.

With the NFL otherwise in a dead zone, activity-wise, the media had nothing else to talk about in regards to the NFL other than the schedule unveiling tonight. With that being the case, it seemed like everyone with an opinion and an outlet had a guess on who the Packers would be opening against.

As it turns out, everyone was wrong.

The Green Bay Packers will be opening against the Jacksonville Jaguars on September 11. The NFL was clearly throwing the Jaguars a bone here, maybe as a reward for being open to regularly playing at their probable eventual destination in London.

The Packers will stay on the road and play at Minnesota in Week 2. That game will be the grand opening for the Vikings’ new U.S. Bank Stadium. The Packers will then finally get their first game at Lambeau Field against the Detroit Lions in Week 3.

For me, the most notable thing about the beginning of the schedule isn’t in the first three weeks. It is the fact that the Packers have been saddled with the infamous Week 4 bye week. That means that just when you are getting into the season, you’ll get a week with no Packers. What’s worse, the Packers will be looking at 13 straight weeks of football after the bye.

On the plus side, at least we’ll be getting the bye out of the way early.

The other highlight of the schedule is probably right after the bye, when the Packers host the Giants, Cowboys and Bears in consecutive weeks. When you combine that with the home game against the Lions before the bye, the Packers actually play four straight games at home and go a month and a half without playing a road game. Consider that and be dismayed.

Besides being bizarre, the other primary trait of the 2016 schedule is that it looks easy. In fact, I can’t remember the last time I saw an easier schedule on paper. The only playoff teams from last season that the Packers play on the road in 2016 are the Vikings and Redskins. Seriously.

It would take an epic collapse for the Packers to not post a better record than the 10-6 they put up last season.