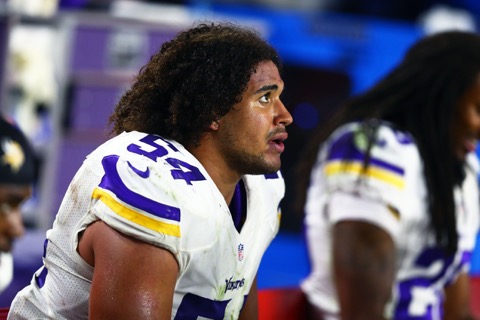 Here’s another example of what a sorry-ass existence it is if you’re a Minnesota Vikings fan. Not only are you ugly, unemployable and regularly fornicate with barnyard animals, but one of your best young players just kissed all kinds of Green Bay Packers’ ass.

So even though the Vikings backed into a division title, they’re still the red-headed younger stepbrother in the division and even their players know it.

He made an appearance on the NFL Network to share his thoughts on… whatever.

While he was there, he made sure to talk about how much he LOVES Aaron Rodgers. You wish you had a quarterback half that good, don’t you Kendricks?

“(Aaron Rodgers) is a very smart quarterback and obviously a very skilled quarterback. There’s only so much you can do against him, because he’s going to make his plays, but you gotta be sharp as well.”

Just wait until he removes his head from his ass and finds his accuracy again.

“Eddie Lacy (is the hardest player to tackle). He’s just a big bruiser. He keeps those feet moving and (the Packers) have a good offensive line. Anytime you have those two combined, it’s tough.”

That fat bastard Lacy wasn’t even at his best last season.

If Kendricks thought he was tough to tackle then, wait until he gets a load of this new and improved Ed Lacy.

The Packers are going to fucking roll these assholes in 2016.