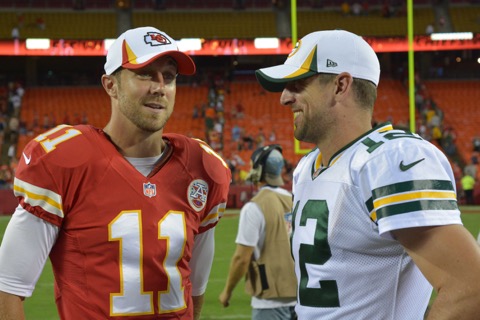 We get to revisit this every year as the draft approaches. How the San Francisco 49ers chose Alex Smith over Aaron Rodgers with the No. 1 pick in the 2005 draft.

Rodgers, of course, would tumble all the way to the Packers at No. 24.

And while Smith is a safe, serviceable quarterback, Rodgers is a future Hall of Famer.

Mike Nolan, the 49ers coach at the time, appeared on NFL Network Tuesday morning to rehash the team’s reasoning for choosing Smith over Rodgers.

He had plenty of them, too.

“It was one of those, maybe, paralysis by analysis. We had so much time to think about it,” Nolan said.

“We put a lot of stock in changing Aaron’s throwing style. We also got caught up a little bit in that Alex was so mobile. That was a good thing. But in the end, we felt Alex would be the better long-time guy. Obviously, we were wrong in that thought process.”

This next one is even more interesting.

“The other thing as Alex at the time was a good kid – a very good person, a safe choice, always trying to please,” Nolan said. “On the other hand, Aaron was very cocky, very confident, arrogant. So you can say, ‘Why didn’t you take him to begin with?’ Because that’s really what your best quarterbacks look like. They aren’t very pleasing. They aren’t very safe.

“And as time has showed, that’s really how Alex plays. He doesn’t turn the ball over. He’s very secure with the ball. And on the other hand, Aaron is a slinger. He’s all over the place and makes great, big plays. Obviously, he’ll be a Hall of Fame player one day.”

Nolan ultimately admitted the 49ers should have chosen Rodgers.

We’re pretty happy they went with the safe pick.

Ted Thompson’s Best Pick By Round

Ted Thompson's Best Pick By Round