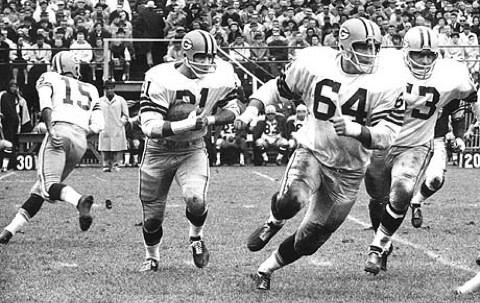 You sure are lucky if you live in Wisconsin right now. Politicians of all sorts have been swarming the state like locusts to a goddam wheat field.

Of the two, we’d say locusts are actually the more desirable scourge.

Sarah, could you say something really fucking ignorant and nonsensical?

Why, of course I could! I’ll just open my mouth…

This poster child for the mentally challenged — you too can be a vice presidential nominee! — was in Wisconsin over the weekend campaigning for Donald Trump.

Naturally, Palin had to say something about the Green Bay Packers. As usual, it made zero fucking sense…

“It’s always so good to be in Wisconsin, getting off the airplane today as I’m walking through the airport and seeing all the green and gold and green – and gold till I’m dead and cold – paraphernalia everywhere, it’s Packers.”

Yes it is Packers! Yes it is!

Palin then got on to former Packers guard Jerry Kramer.

You may have heard — he isn’t in the Hall of Fame.

And now she wants to try to help get Jerry in the Hall of Fame.

While that’s swell and we all believe Kramer belongs in the Hall of Fame, we also know it isn’t going to do anything.

This isn’t a popularity contest. Hall of Famers are selected by a committee of guys who have or do cover the NFL.

Each one of those times he failed to garner the appropriate amount of support from the voters.

We’ve long heard the reason Kramer isn’t in isn’t because he’s not good enough, it’s because he pissed off the wrong people. More than a few people view Kramer as selfish and feel he put himself above the team.

That isn’t speculation. We’ve heard it from people inside the Packers organization.

So while getting behind Jerry’s candidacy is fine, no amount of letter writing or fence painting is getting him elected. That would take either a fundamental change in the way the voters think or some of those voters actually being replaced.

We suppose the good news is Kramer’s fate lies with the seniors committee these days and there are only nine of those guys.

Maybe Palin could have a few of them killed.