by Shawn
in Uncategorized
19 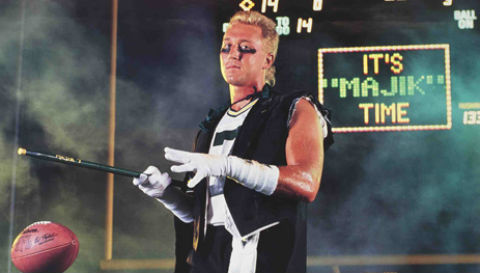 On April 10th, 1987, twenty-nine years ago today, the Packers selected Don Majkowski with their 10th round pick. If you, like me, remember that day, then you are getting old.

The brash and athletic, if unheralded, quarterback out of Virginia was damaged goods already the day the Packers drafted him. He had separated his shoulder the fourth week of his senior year and never had it properly mended. He knew that if he sat out a month, he wouldn’t be drafted. Majik got his way. He played. Virginia finished 3-8, and Majik was drafted, just barely.

With Majkowski being a 10th round pick and a still young Randy Wright on the roster, virtually nothing was expected from Majkowski. However, those of us who remember the late 80’s know how it went. Randy Wright did little but absorb punishment the hapless years he was with the Packers. When he had enough, Majkowski got to start five games already his rookie season.

Then Lindy Infante came to town. Seeing his chance for the starting job, Majkowski attended all the offseason programs. By time the preseason rolled around, his shoulder hurt so bad he missed half the preseason. Still, mostly by default, Majik won the starting job and started the last nine games of the season.

Knowing he would be the man for 1989, Majik worked hard to rehab his shoulder, which had already been diagnosed with severe tendinitis. He changed his throwing motion slightly. For one year, it worked.

The Cardiac Pack of 1989, led by the Majik Man, would put up one of the most exciting seasons in Packer history. After a clunker loss to the creamsickle-panted Tampa Bay Bucs in Week 1, the Packers looked to be a complete clown-fest in falling behind 24-7 in the first half to the New Orleans Saints in Week 2. Then, the Packers stormed back. A 4th-and-17 conversion to Jeff Query highlighted the game-winning drive that ended with a Majik-to-Sterling Sharpe touchdown pass. The Packers won 35-34, the first of an NFL record four games won by a single point during one season.

The 1989 Packers repeatedly followed disappointing defeats with exciting comeback wins, typically pulled out in the final seconds. The Packers finished 10-6, their best record since 1972, but they missed the playoffs due to a tiebreaker that went to the Minnesota Vikings.

That fact, and the penchant for miraculous comebacks, has clouded how good that team and Don Majkowski were that season. Majik, Sharpe, Tim Harris and Brent Fullwood all went to the Pro Bowl. Everyone remembers the miraculous 14-13 win over the Chicago Bears at Lambeau Field, but no one talks about the fact that the Packers went to Soldier Field later that season and crushed the Bears. It also is largely forgotten that the Packers beat the San Francisco 49ers at Candlestick Park. That was the last game the Joe Montana-Jerry Rice-Ronnie Lott juggernaut would lose before crushing the Denver Broncos in the Super Bowl that season.

If you know this story, then you also know how it all came crashing down. Don Majkowski was a restricted free agent and held out in 1990.  Majkowski was named as one of eight plaintiffs by the NFLPA in a lawsuit agains the NFL, pushing for the free agency that would come to be just a couple years later. Partially perhaps because of that, and partially because Lindy Infante believed in Anthony Dilweg, the Majkowski holdout lasted until the season started.

Having missed the entire offseason and preseason, Majkowski was shaky when he returned to the field in the second half of a loss to the Chicago Bears in Week 2. He started slowly and the Packers started 2-4 before the bye. After the bye, Majkowski and the Packers began to regain their prior season form. They won four out of five to get to 6-5 and appeared to be a solid contender for the playoffs.

Unfortunately, at the end of that run, Freddie Joe Nunn of the Phoenix Cardinals caught a scrambling Majkowski from behind and threw him on his shoulder. This time it was a torn rotator cuff. He missed the rest of the season and would never really be the same player. Brett Favre entered the scene, taking over for an injured Majkowski, of course, in Week 3 of 1992. The rest is history.

They say it is better to burn furiously and then out rather than fading away, and such was the Majik Man’s career in Green Bay. In honor of one of the greatest single seasons in franchise history for both a team and a quarterback, Don Majkowski entered the Packer Hall of Fame in 2005 with Edgar Bennett.

For those who have come to fandom during the tenures of Brett Favre and Aaron Rodgers, they may look at the brief career of Don Majkowski and wonder why he has a place among the Packers’ all time greats. But for those of us that remember the Cardiac Pack and the Majik Man, we remember the athletic and charismatic player that at the least breathed hope and excitement back into a dormant franchise.