by Mordecai Jones
in Uncategorized
16 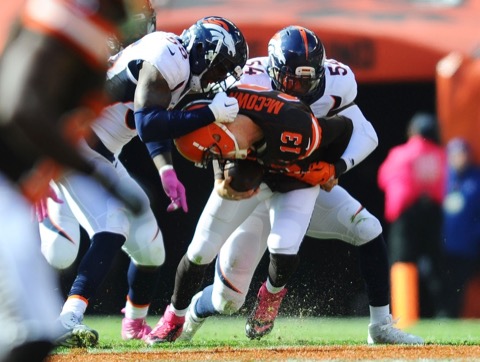 So who the hell is this guy?

McCray played two seasons with the Broncos. In those two seasons, he played in 24 games with no starts. McCray has 21 career tackles, 1.5 sacks and a forced fumble. He had 15 of those tackles and one-half of that sack total in 2015.

In other words, he’s depth.

The Packers’ OLB depth chart before the McCray signing consisted of Clay Matthews, Julius Peppers, Nick Perry, Datone Jones and Jayrone Elliott. The signing of McCray would certainly round that group out and is the most definitive sign yet that Mike Neal won’t return.

If you needed another one, that is.

McCray was not tendered a contract by the Broncos as a restricted free agent. On one hand, that says the Broncos don’t think much of the guy. On the other hand, signing McCray doesn’t count as a negative to the Packers’ compensatory pick formula.

The league views McCray not being tendered the same way it views Jared Cook, who was released by the Rams. They are not considered true unrestricted free agents. Thus, they don’t technically count as free agent signings.

Eddie Lacy Looks Like Tiny Human Being After Weight Loss

Eddie Lacy Looks Like Tiny Human Being After Weight Loss