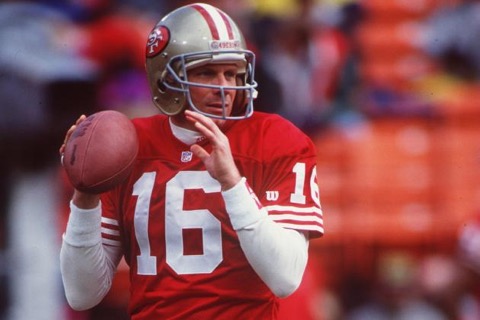 The NFL Draft is littered with stories like these. The scouting department wants one guy, the coach or general manager wants another and the team ultimately ends up passing on a Hall of Fame talent.

It happened with the Green Bay Packers and Joe Montana, according to scout Chris Landry, who has compiled a list of such horror stories from throughout the draft’s history.

Montana, the greatest quarterback I’ve ever personally witnessed, is in the Hall of Fame. Johnson played just three seasons with the Packers.

Now, before you get delusions of grandeur about Montana leading those Starr-coached teams to glory, consider this.

The Packers had a perfectly fine quarterback at the time in Lynn Dickey. The guy led the league in yardage (4,458) and touchdowns (32) in 1983. Sure, he threw his share of picks, but was capable enough of leading the offense.

The Packers’ problems on those teams always stemmed from one place — defense.

They couldn’t play any. Outside of a John Anderson here and an Ezra Johnson there, the Packers had no talent on defense and usually found themselves in a track meet because of it.

Not even Joe Montana was going to make up for the ineptness of those late-70s, early-80s Packers defenses.

Of course, you could argue that passing on Montana changed the trajectory of the Packers. That having Montana would have caused them to draft differently. Landry suggests that contributed directly to another knee-jerk move a couple years later.

Starr, missing out on Montana two years earlier was determined to draft a quarterback this go round and selected Cal-Berkeley QB Rich Campbell at No. 6, passing on the guy who the Packers wanted to draft — USC DB Ronnie Lott, who was selected by the 49ers two picks later.

Campbell stuck with the Packers for four seasons, but he never started a game.

Although it was commonplace at the time, this is why most coaches don’t also get to be general managers anymore.