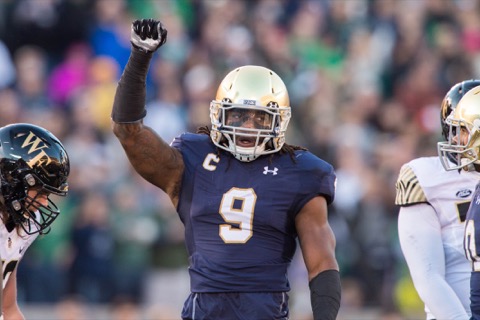 There was a time when the Green Bay Packers would have, without a doubt, had no shot of drafting UCLA linebacker Myles Jack or Notre Dame linebacker Jaylon Smith.

Both of those guys would very likely have been top-10 picks. That is, if it weren’t for major injuries.

Jack is a pure athlete. He had 75 tackles as a freshman and 88 as a sophomore. He also rushed for 10 touchdowns over those two seasons.

Yes, he played running back in addition to linebacker.

Then he tore his meniscus after playing in just three games of his junior season. Although Jack says his knee is fine, there have been reports that some teams are concerned after rechecking it.

Smith has found himself in an even worse scenario.

He tore his ACL and LCL in the Fiesta Bowl. After some poking and prodding by NFL teams, it is now expected that Smith won’t play at all in 2016.

Here is a guy who had 113 tackles as a junior and 112 as a sophomore. He won the Butkus Award and was a consensus All-American in 2015.

While we’re not sure what’s going to happen with Jack, we are pretty certain that Smith is going to slide a long way in the draft, probably out of the first round.

So then the question is, do the Green Bay Packers, who need linebacker help both inside and outside, take a flyer on one of these guys if they’re available?

The tradeoff is obvious.

You’re selecting a player who may not be able to play right away, but you’re getting a potentially elite talent for a lower-than-expected cost.

We’re sure the Packers have done their homework on these guys. If they end up taking one of them, then we have to believe they believe the player is medically sound and will fully recover.

Do we expect it to happen?

We don’t and you need look no further than Justin Harrell for the reason.

Although not as highly touted as Jack and Smith, Harrell was nonetheless a well-regarded prospect when the Packers drafted him in 2007 with the 16th pick. The Packers drafted Harrell knowing he had a torn biceps tendon. He was limited (and overweight) when he came in and then suffered one injury after another.

Harrell played in just 14 games in his four seasons with the Packers.

It’s an apples to oranges comparison, yes. We’re sure Jack and Smith are more motivated than Harrell was.

However, we can’t believe that situation left a good taste in Ted Thompson’s mouth. Thus, we’d bet he’s going to steer clear of anyone in the draft with an injury history.

That is, unless the value is just too great at a certain point in the draft.

Myles Jack? Probably gone before the Packers are on the clock.

Jaylon Smith? We’d take a flyer on him with a fourth-round pick.

Packers Will Be In Offensive Line Market Early

Packers Will Be In Offensive Line Market Early