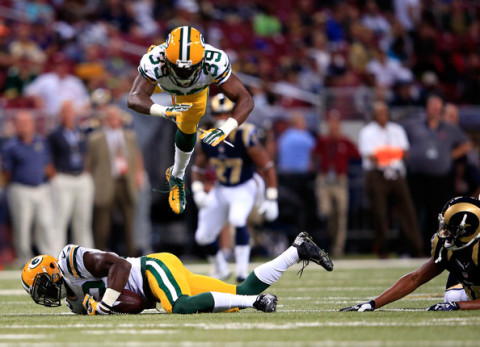 For the second straight year the Packers will start their season with two defensive players serving suspensions for violating the NFL’s drug policy.

Last year, it was Datone Jones and Letroy Guion who started the season in street clothes. In 2016, Mike Pennel and Demetri Goodson will proudly take up that torch.

Demetri Goodson added to his so far promising career by getting clipped with a 4 game suspension, allegedly for using PEDs, though his lack of “enhanced” play suggests he might be taking the wrong drugs.

It now seems like a Packer defender being dinged for a drug offense is a regular rite of spring. Whether it is smoking the chronic or taking PEDs, the Packer defense can’t seem to get out of the NFL doghouse. With Guion, Jones, Pennel and Goodson now all having served suspensions, the Packers are just one more violation away from losing someone for a significant stretch of time.

When you combine that with the stories that allegedly have linked Clay Matthews and Mike Neal to performance enhancers, Packer defenders just can’t stay away from the pharmacy and keep their noses clean.

Goodson’s loss mostly hurts the Packers special teams, where Goodson was one of the better players. The Packers remain stacked at the corner position with LaDarius Gunter likely happy for the news.

Packers Put Nate Palmer Out of Your Misery