Davante Adams is a Rising Star! 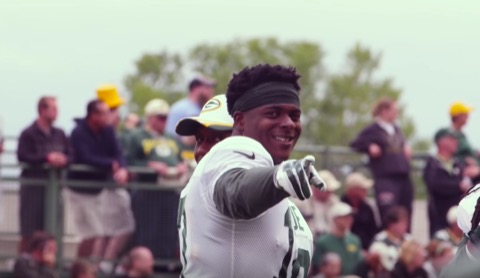 Are you ready for a chuckle? This should do the trick.

Sports Illustrated released this Davante Adams “rising star” video on Monday. The footage was clearly shot just prior to the 2015 season.

As you’ll recall, Adams’ 2015 season was a trash heap of drops, poorly-run routes and flailing, unathletic attempts to catch the football. The guy actually regressed from his rookie season, catching 50 balls for 483 yards and just one touchdown.

That was 9.7 yards per reception in case you were wondering.

In other words, he didn’t turn into a rising star like Sports Illustrated wanted to predict.

The curious thing here is, why did this video just appear on Monday? It clearly pegs Adams for a breakout year during his second season.

The only explanation we can come up with is either, A. someone totally forgot about it and just said, “Eh, might as well put this out there now,” or, B. SI quickly saw Adams wasn’t going to break out in his second season, decided they didn’t want to look stupid, and shelved the video only to release it in April of the following year when, seemingly, no one would notice.

We can’t say for certain, but we find it hilarious nonetheless.