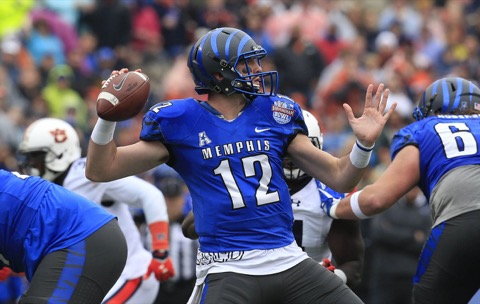 Here’s an intriguing idea. The Green Bay Packers trade out of or back in the first round to acquire additional selections.

That option has reportedly been presented to Packers general manger Ted Thompson. Both the Cleveland Browns, who own the No. 32 pick, and the Denver Broncos, who own the No. 31 pick, have called about moving up to No. 27, according to Walter Football.

The Broncos are apparently eying Memphis quarterback Paxton Lynch — who, as an aside, looks like he’s going to an audition for the Backstreet Boys — and feel they need to jump ahead of the Kansas City Chiefs (No. 28) to nab him.

If the Packers swapped places with the Broncos (and acquired another pick for doing so), they would be choosing last in the first round. The No. 31 pick is the final pick of the first round this year because the New England Patriots were stripped of their first-round pick for deflating footballs.

The same scenario exists with the Browns, although their No. 32 pick is the first of the second round. Thus, the Packers wouldn’t be making a selection on the first day of the draft.

That has happened once before under Thompson.

In 2008, Thompson sent the Packers’ No. 30 pick to the New York Jets for their No. 36 and No. 102 pick. They also gave up their No. 113 and No. 162 picks. Essentially, the Packers moved up in the second and fourth round, out of the first and gave up one of their three fifth rounders.

That second-round pick from the Jets was Jordy Nelson.

In all likelihood, a trade like this won’t happen with the Packers before the draft is in progress. Thompson will want to evaluate who’s on the board at No. 27 before deciding what to do with the pick.