by Joseph Bonham
in Uncategorized
31 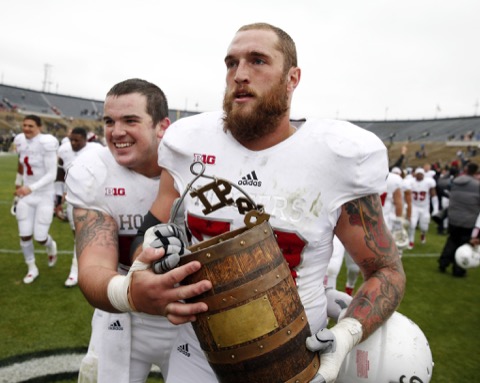 The Green Bay Packers traded up in the second round to grab Indiana tackle Jason Spriggs.

We’ve laid out the many reasons the Packers were likely to address the offensive line early in the draft. There was also a pre-draft rumor the Packers were targeting a tackle with the idea that they’d move David Bakhtiari to guard.

Bakhtiari, who will be a free agent after the season (along with Josh Sitton, T.J. Lang and J.C. Tretter), is a decent left tackle, but commits too many penalties and often gets overpowered.

What do the Packers have in Spriggs?

#Packers director of player personnel Brian Gutekunst on Jason Spriggs, 2nd round pick: his athleticism is what stands out

Spriggs (6-6, 307) was great at the Senior Bowl and impressive at the combine. He started all four years at Indiana.

The Packers don’t necessarily need Spriggs to come in and start this year, but they’ve just made sure their line will remain solid beyond 2016.

This is probably a good sign that, of the four 2017 free agent offensive lineman, two will finish their careers elsewhere.

In addition to their own second-round pick (No. 57), the Packers sent a fourth and seventh-round pick to the Colts.

Kenny Clark Wore a Tux to His Draft Party