Aaron Rodgers Has a Sick Burn for John Kasich 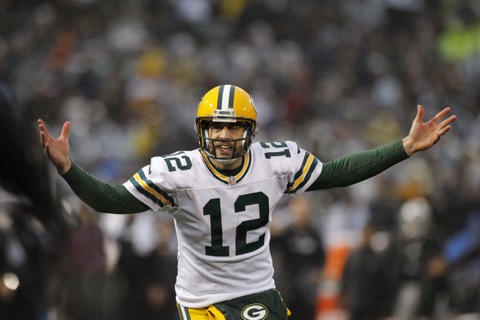 People are voting in the Wisconsin presidential primary right now. A number of those voters — probably those who are as disinterested as I — have decided to write in Green Bay Packers quarterback Aaron Rodgers as their man.

That prompted someone to ask Rodgers who he would choose as his vice president. Rodgers, never one to pass up an opportunity to stick it to someone, used this as an opportunity to burn Republican candidate John Kasich.

Kasich maybe. Depending on how the rest of his year goes. #WINconsin https://t.co/sXd7q8BDsz

If you’re late to this one, Kasich told a town hall meeting last week he might choose Rodgers as his vice president, “maybe if he had a better year, next year.”

We all know Rodgers didn’t have a good year in 2015, but it is not John Kasich’s place to say that, particularly while he’s trying to endear himself to the people of Wisconsin. Kasich did what politicians do on Saturday and backtracked.

Rodgers has that long memory, though.

You can bet your ass he was just waiting in the weeds for a chance to pounce on this one.

And pounce he did.

John Kasich’s people can pick up his devoured carcass on the corner of Lombardi and Oneida.

Davante Adams is a Rising Star!