When Brian Brohm was Greater than Aaron Rodgers 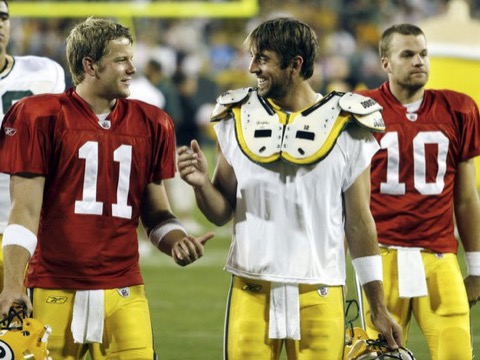 Probably not, unless you’re a Louisville Cardinals fan.

He was a second-round pick of the Green Bay Packers in 2008. He was once considered a can’t-miss quarterback prospect and presented great value for the Packers in that draft, even though they had just turned the team over to Aaron Rodgers.

Brohm lasted a little over a year in Green Bay.

As a rookie, he was the team’s third quarterback behind Rodgers and Matt Flynn, a seventh-round pick in the same draft. The Packers cut Brohm on September 5, 2009 and then signed him to the practice squad.

The Buffalo Bills poached Brohm from the Packers’ practice squad in November of that year. He lasted though the 2010 season as a backup in Buffalo and has been out of the NFL since.

Not really the career the Packers or anyone else envisioned for Brohm. He wasn’t able to adapt to the speed of the NFL early on and then seemed to lose his confidence. He never regained it.

There was a time, however, that some people thought Brian Brohm was better than Aaron Rodgers.

Those people were Todd McShay and Merrill Hoge.

Two guys paid to be wrong about football.

That’s laughable now, of course, which is why we find this clip so funny.

Previous Article
Crosby Credits Woodson with Helping Him Out of Slump
Next Article
Richardson Hasn’t Been Ruled Out, But Faces Long Road