Rumors Abound About Martellus Bennett and the Packers 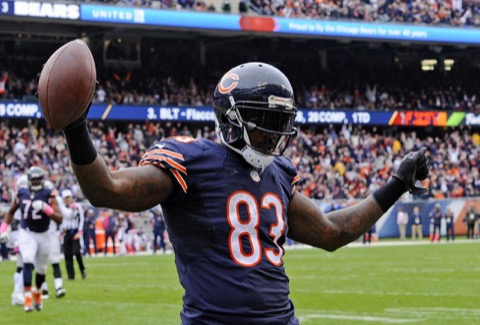 He’s also property of the Chicago Bears until further notice.

Source confirms the #Packers are indeed showing interest in TE Martellus Bennett. As things stand would be a trade situation. #Bears #NFL

That Luke Rodgers would be Aaron Rodgers’ brother and, to be quite honest, we don’t consider him to be a reliable source of football information. So go ahead and do with that what you will.

More importantly, we can’t see Ted Thompson giving the Chicago Bears one of the Packers’ draft picks for any reason whatsoever.

However, this came through later on Tuesday.

So Packers will be interested if the Bears waive him. pic.twitter.com/qSQeDKpPl2

We do consider Ed Werder to be a reliable source of football information.

It also makes much more sense that the Packers would make a run at Bennett if he were a free agent.

Bennett is 28 and at 6-6 would give the Packers a big target to stretch the middle of the field. Bennett much more athletic than incumbent Richard Rodgers, so he would pose a match-up problem for opposing defenses that Rodgers does not.

Bennett had 53 catches for 459 yards and three touchdowns in 2015. That was a down year, however.

The downside here is Bennett likes to talk. He says what’s on his mind, but the Packers have been through that before.

They dealt with it when Jermichael Finley was the man.

First we have to see if the Bears are really ready to part ways with Bennett.