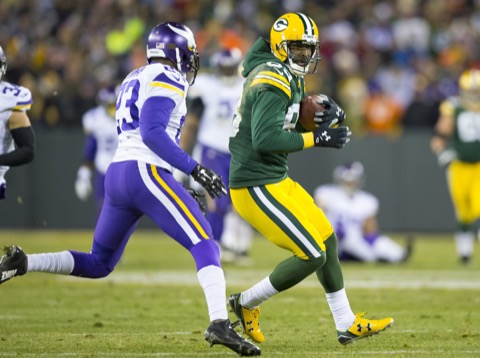 The Green Bay Packers have done something outside of their norm. They’ve actually told one of their own free agents they won’t be re-signing him. That free agent is receiver James Jones.

That part was expected. The Packers will go into 2016 with six roster-worthy receivers already on their depth chart. Those guys are Jordy Nelson, Randall Cobb, Davante Adams, Jeff Janis, Jared Abbrederis and Ty Mongtomery.

You could argue that Davante Adams isn’t worthy of anyone’s roster and we wouldn’t blame you, but the fact of that matter is he’s a former second-round draft pick and he’s not getting released prior to his third season.

With all those bodies, there simply isn’t room for Jones.

What was actually unexpected in this development is the Packers telling Jones they’re moving on without him.

Why is that unusual?

Typically, the Packers don’t say anything to guys they don’t plan to re-sign. We’ve seen it time and again. Radio silence until training camp rolls around and the guy either has found another team or realizes he’s being forced into retirement.

Not even a call to say, “Thanks for the effort. We’re going in another direction.”

The fact that Jones got that small gesture suggests either the Packers front office is turning over a new leaf (unlikely) or Jones’ agent was really aggressive in trying to get his client back in Green Bay (probable).

I mean, we could dream that these guys had some common decency though, couldn’t we?

Jones caught 50 passes for 890 yards and eight touchdowns in 2015. The last two numbers led the Packers.