No Forte, Trevathan For Packers; Green Still Out There

by Shawn
in Uncategorized
37 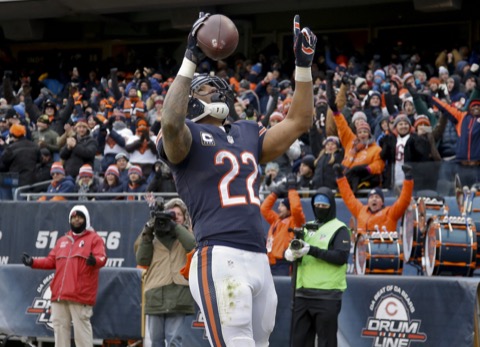 You might have noticed that the NFL free agency period started today at 3 PM EST. Or being a Green Bay Packers fan, you might not have.

As usual, all things remain quiet on that front in Green Bay, Wisconsin. However, one of the biggest questions entering this free agency period has already been answered. Will Matt Forte be a Packer?

If you were one of the boisterous and overzealous Matt Forte crowd, you just got the usual Ted Thompson punking. Matt Forte didn’t even last the first three hours of free agency without being whisked away by the New York Jets.

Contract details are not yet known, but the fact that Forte didn’t get through day one says probably all you need to hear. The Packers might have been interested, but they certainly weren’t going to get into a bidding war for a running back with Eddie Lacy up for renewal at the end of the season. Since the Jets had their own free agent running back, Chris Ivory, signed away by the cap-room-rich Jacksonville Jaguars, it is no surprise that they were interested in Forte.

The running back position was supposedly going to be back of the bus this time around, with some pundits suggesting NFL teams might collude to keep salaries down.

From Doug Martin to Lamar Miller, Chris Ivory and even an aging Matt Forte, all have already been signed in the first three hours of their availability.

And if any of you thought Forte would go where he thought he could win a title, WRONG.

Nothing makes you feel better about being home for the playoffs than a few million dollars.

The Chicago Bears won’t be seen crying over the loss. They made their own splash by signing Broncos linebacker Danny Trevathan, another player many predicted the Packers might be in play for. So, the bad news is the Packers won’t be getting Trevathan for the middle of their defense, and the worst news is you’ll still be seeing plenty of him.

This was predictable, however, as Monty and I discussed the likelihood of the Bears signing Trevathan during our podcast this week.

About the only good news I have for Packers fans at this point is that my No. 1 free agent — tight end Ladarius Green — is still available. Green was expected to be signed by the Pittsburgh Steelers, which makes sense after Heath Miller finally retired. However, that event has not been announced yet, which suggests it may not happen after all. Green might be involved with multiple suitors, or the Steelers, who are known to be free agent frugal themselves, might be dragging their feet in the hopes of saving a buck.

Regardless, until we hear otherwise, we’ll hold out hope.