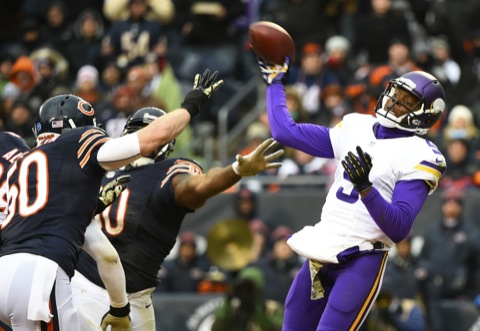 We’re going to take a brief break from discussing all of the Green Bay Packers’ not-signing-any-free-agents activity to laugh at the stupid Minnesota Vikings.

Because what good are the Vikings if not for that?

Wallace, who’s known primarily as a deep threat, had a crappy 2015 in Minnesota. He caught 39 passes for 473 yards and two touchdowns.

The Baltimore Ravens quickly signed Wallace earlier this week. Wallace took that as an opportunity to let everyone know why he had a crappy season in Minnesota.

Because of the puss-armed douche throwing him the ball. That’s right, Teddy Bridgewater. Or as I like to call him, Ted Butthole.

“When this process started, I knew that I wasn’t going back to Minnesota,” Wallace said. “I was like, ‘I need a good quarterback.’ I need a quarterback who I know is proven and can get things done.”

In other words, Wallace needs a quarterback who can throw the ball further than eight yards.

On the other hand, Ravens’ quarterback Joe Flacco may be a dope, but that clown can sling the ball down the field.

We find it insanely amusing to listen to a guy who played with Butthole disparage the guy. This guy is the Minnesota Vikings’ savior after all. The one who’s going to lead them to the promised land.

Just ask any one of those mouth-breathing, Hormel Chili-stained fucks who call themselves Vikings fans.