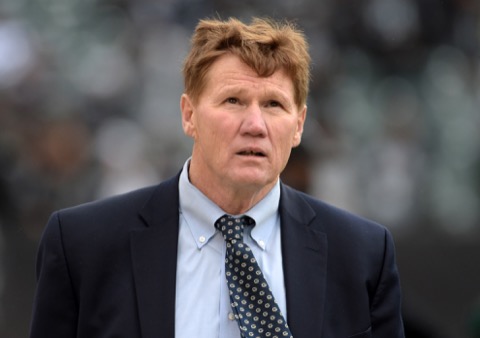 We know someone who would just love this. Someone who has referred to Green Bay Packers president Mark Murphy as both Ginger Gap Tooth and Mr. Status Quo.

This one definitely falls into the latter category.

Murphy admitted that he’s bothered by fan perception that the Packers only build their team through the draft. He then denied that to be the case and said he wasn’t going to do anything about it all in the same breath.

“At the end of the day, Ted (Thompson) oversees all of football, so he’s got to make decisions that he’s comfortable with,” Murphy said. “Sometimes it does bother me that there’s this perception that all we care about is the draft. Look at Julius Peppers, look at the difference he’s made, and obviously Charles Woodson. So we’ve done things — not to the degree other teams have done — but there are a lot of examples across the league where it hasn’t worked out.”

Secondly, that makes it much more than a perception. The Packers participate in free agency much less often than the rest of the league does. Some might say that puts them at a competitive disadvantage. It’s as if Murphy refuses to accept that and as a reaction, must blame fans for their “ill-informed” perception.

We’re not suggesting Murphy would or should fire Thompson, although there are surely those who wouldn’t be disappointed to see him go.

Guys should do their jobs with all the tools at their disposal and should be held accountable when they don’t. In Green Bay, the job is to win championships.

Unfortunately, for the leadership at the top, making the playoffs is good enough.

“You’re in the tournament, and you have a chance,” Murphy said. “Obviously we’d rather have won a few more Super Bowls, but, yeah, it’s hard to achieve across the league. It’s the Patriots and us. But I know the expectations are high, and there’s disappointment, but I think realistically the league is designed so you can’t have consistent success.”

Both the Packers and Patriots have made the playoffs the past seven seasons. They’re the only teams to be in that position.

And if we were fans of the Minnesota Vikings or Detroit Lions, we might be real fired up about something like that.