Let’s Not Forget All the Packers Do For Us

The Green Bay Packers announced their plans for this year’s Tailgate Tour on Tuesday. As usual, we shrugged our shoulders and gave them the old Jay Cutler — dooooooooooooon’t caaaaaaaaaaaaaaare.

We understand some people do care, though. Some people are happy there is a Tailgate Tour this year.

And if you’re not familiar with this thing, the Packers load up some current and former players and staff on a bus and parade those guys around the state of Wisconsin. Typically, they visit smaller towns. We suppose the idea there is the people who live in these towns don’t have access to the team like people who live in places like Green Bay or Milwaukee, i.e. people who can afford to fork over thousands of dollars for season tickets, parking, concessions, merch and so on.

This year’s tour will run June 17-21 and visit towns like Shawano and Ripon.

That’s great if you’re in to this sort of thing.

What we find totally tacky is this. Here’s the photo that accompanied the announcement. 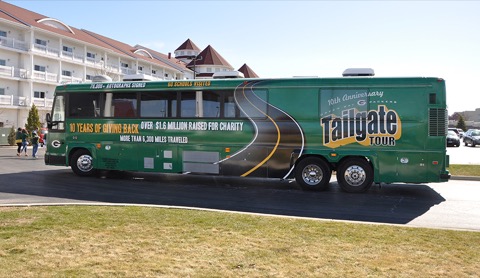 That’s either the bus from one of the past tours or the one the organization will be using this year.

It may be hard to see what it says on the side of that bus, but let us tell you.

Know anyone else who gives to charity and then advertises the fact that they give to charity on the side of a vehicle (or anywhere else for that matter)?

Basically, whoever conceived and signed off on this was saying, yes, we will come to your tiny hometown, but we expect you to bow down to us for all we do for you on our way through.

Interestingly, the Packers reported a record $375.7 million in revenue last year. In context, that $1.6 million they’re throwing in your face (over 10 years, no less) is a pittance.

Previous Article
Curse You Packers Fans in Minnesota Sporting Venues!
Next Article
Brett Favre is Really Into Volleyball These Days