Karlos Dansby, Not Surprisingly, Will Not Join Packers 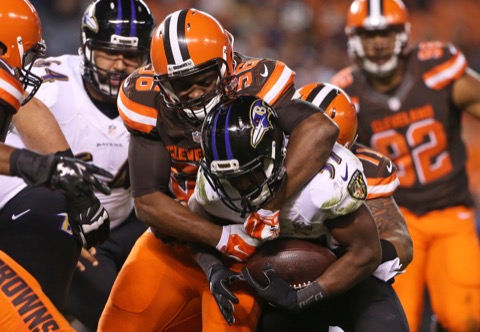 Anyone who had dreams that the Green Bay Packers might sign former Cleveland Browns inside linebacker Karlos Dansby, well… you should have known better.

Dansby is joining the Cincinnati Bengals today. The Bengals were one of the teams Dansby identified — along with the Packers — as teams he was interested in after being being released by the Browns.

Despite being 34 years old and playing for the Browns — two things that would probably disqualify most individuals from playing for any other NFL team — Dansby looks like he can still contribute.

He had 108 tackles, two forced fumbles and three interceptions in 2015. What is more impressive is the Browns used Dansby regularly in coverage. Not only did he fare well against tight ends, but he returned two of his interceptions for touchdowns.

Despite his age, Dansby is the rare inside linebacker who can cover and make plays.

In other words, exactly what the Packers need.

Jake Ryan’s coverage skills are reminiscent of A.J. Hawk’s, which… don’t even get me started.

Well, unless the Packers draft an inside linebacker in the first couple rounds, we’re going to find out.

We don’t have the details of Dansby’s contract, but you can bet it isn’t a significant or long-term one. Plus, since Dansby was released by the Browns, his signing wouldn’t have been a detriment to next year’s compensatory pick formula for the Packers.

Did they even bother to call? We have our doubts.

Ted Thompson and Co. are probably still busy patting each other on the back for signing Jared Cook.