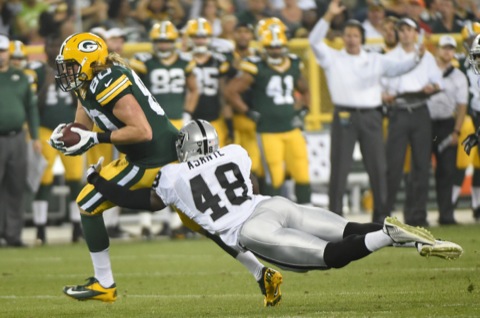 As they did with safety Chris Banjo, the Green Bay Packers decided to retain their other exclusive rights free agent, tight end Justin Perillo.

They did so by tendering Perillo a one-year, $675,000 offer prior to free agency.

So that pretty much solidifies the Packers’ tight end position for 2016, right?

Perillo, also known as Long Hair, Don’t Care around these parts, caught 11 balls for 102 yards and a touchdown in 2015. He started the season on the practice squad and ended up playing in nine games.

As expected, the Packers did not tender restricted free agent linebacker Andy Mulumba.

That tender would have cost the Packers $1.671 million in 2016, which is slightly out of whack for a guy who made just four tackles in six games in 2015.

The team could bring him back on a lesser deal, but as it stands, Mulumba is an unrestricted free agent.

Previous Article
Ted Thompson Wasn’t Even in the Office on Wednesday
Next Article
There’s Interest in Scott Tolzien, But Not As a Starter