by Joseph Bonham
in Uncategorized
36 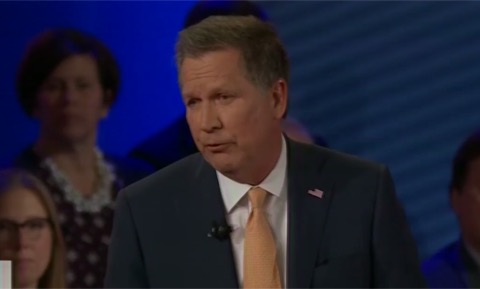 Might as well keep this train rolling with one more politically-themed post. Republican presidential candidate John Kasich was part of a town hall meeting on Tuesday night.

Part of me wants to know what John Kasich is still doing in the race. Another, much larger part of me cares so little about any of this, that John Kasich could literally explode like Kananga in Live and Let Die and I wouldn’t feel one way or another about it.

So, that town hall meeting. Since it took place in Wisconsin, the candidates need to make sure they get their Green Bay Packers references in.

At least one per every 500 words spoken!

Kasich was asked who he might choose for a vice president if he becomes the Republican nominee. After droning on for way too long and saying absolutely nothing, Kasich ends with, “Aaron Rodgers, maybe if he had a better year, next year. We’ll see.”

Good job on the Rodgers reference, John, but we don’t think you have license to dump on him for his crappy 2015 season. That’s OUR job!