Jared Cook Has Played with Some Really Terrible QBs 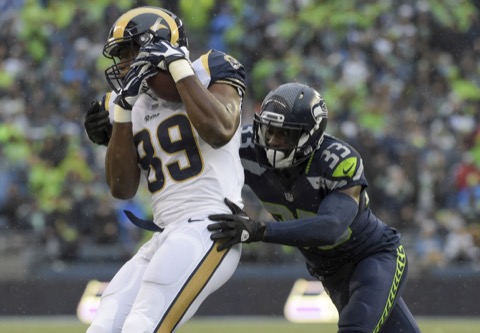 Any pass catcher would want to catch balls from Aaron Rodgers for a living, but the Green Bay Packers new tight end, Jared Cook, is probably more ecstatic about that possibility than most.

It didn’t come as much of a surprise when Cook made note of his desire to play with a quarterback “that can get the job done” during his introductory press conference, on Tuesday.

We perceived that as a shot at Nick Foles and Case Keenum, the two “quarterbacks” Cook played with last year in St. Louis.

However, the level of futility with which Cook has dealt at the QB position has been a constant throughout his career.

This should tell you something right here. Cook has had the most success with Matt Hasselbeck.

While Hasselbeck is a solid QB, Cook played with him in Tennessee, when Hasselbeck’s career was on the downslope. In fact, the Titans considered Hasselbeck a placeholder for Jake Locker, who was, frankly, even worse.

In addition to an old Matt Hasselbeck and a never-any-good-to-begin-with Jake Locker, Cook also had these clowns throwing him the football (or trying to).

If you said a list of backup quarterbacks, that would be pretty accurate.

The fact that Cook managed to put up any numbers at any point in his career with that cast of characters is pretty close to amazing.

As we said, he fared best with Hasselbeck.

No wonder new Packers TE Jared Cook is looking forward to playing with Aaron Rodgers. Here are his numbers by QB: pic.twitter.com/JjHj1VrNYP

What can Cook do with Rodgers?

The sky appears to be the limit.

Brett Favre is Really Into Volleyball These Days