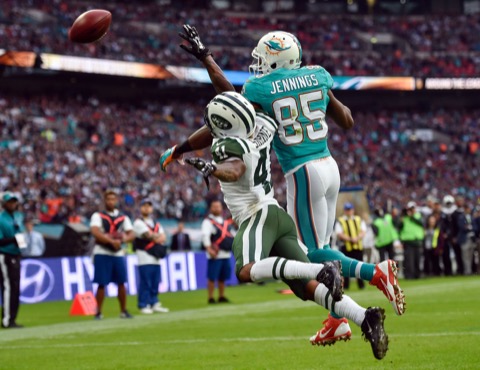 Not much has gone right for receiver Greg Jennings since he left the Green Bay Packers.

Jennings was released by the Minnesota Vikings last offseason and now he’s been released by his latest team, the Miami Dolphins.

The Dolphins parted ways with the outspoken Jennings on Saturday.

The move shouldn’t come as a shock to anyone. Jennings posted just 19 catches for 208 yards in his lone season in Miami.

Now 32, Jennings has seen his production drop each of the past three seasons. He’s five seasons removed from arguably his best year and last 1,000-yard season. That was 2010, when Jennings caught 76 balls for 1,265 yards and 12 touchdowns with the Packers.

It may be time for Jennings to start thinking about calling it a career.

Interestingly, another soon-t0-be former Packers receiver, James Jones, has either maintained or improved his numbers as he’s aged. Jones set a new career high in yardage (890) with the Packers in 2015 at age 31.