My God, the Vikings Are a Bunch of Stupid Assholes 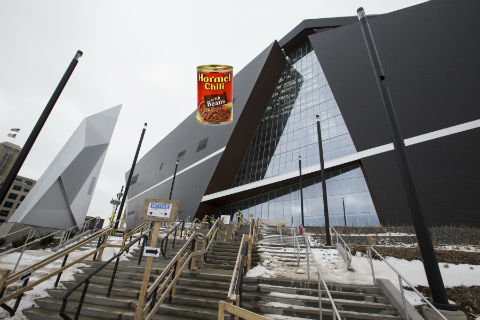 The Minnesota Vikings will open their stupid Hormel Chili Dome this year. Do you know where that shithole of a stadium is located?

It’s on Chicago Avenue in Minneapolis.

The only thing that could be better is if it were on Green Bay Packers Avenue or on whatever street the local hookers hang out. You know, then Vikings players could have easy access to companionship for their next boat trip on Lake Minnetonka.

Anyway, the shitbirds who run the Vikings have now decided they don’t want their address to be Chicago Avenue, so they’ve petitioned the City Council to change it to Vikings Way.

The City Council told them to go fuck themselves.

“My understanding of our policy here is that we don’t want private businesses to change the names of streets in front of their business,” said Council Member Lisa Bender. “So if this was a proposal for Target Way instead of Nicollet Avenue or Wells Fargo way instead of Chicago Avenue, would we expect to be recommending approval of this name change?”

Ironically, if the street name did change, it would also change the address of the city morgue, which is at 530 Chicago Avenue. Frankly, they may as well just rename the section of the street where the morgue is to Vikings Way, since that’s where every Vikings season in all of history has wound up anyway.

Now, that would be appropriate.

As for renaming the street in front of the stadium, here’s what we don’t get.

These fucking morons have known where this stadium was going to be located for two years now. It just now occurred to them that, hmmmmm… maybe we don’t want our address to be on Chicago Avenue? Derrrrrrrrrrrrrrrrrr?

The level of stupidity is stupefying to witness.

But that’s why they’re the Minnesota Vikings, isn’t it?