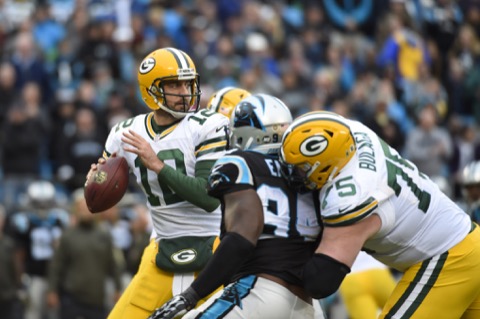 Guys aren’t worth the $6.75 million per season the Packers decided to throw at Bulaga on the eve of free agency last offseason. It was a classic case of the Packers overpaying to keep one of their own guys.

And now the Packers are stuck with Bulaga and his gigantic contract for at least a few more years. If the Packers were to decide to release the guy, which we know won’t happen, they would be forced to suck up substantial dead money into their salary cap.

That number is $6.4 million this season and $4.8 million, $3.2 million and finally $1.6 million over the remaining years of the deal. Only in that final season does the amount of dead money become somewhat palatable.

We bring this up because in 2015, Bulaga was the weak link among the Packers starters on the offensive line. We bring it up because the Packers have been talking up backup J.C. Tretter, who has done time at both center and tackle.

In fact, Tretter was the only capable fill-in the Packers were able to find for left tackle David Bakhtiari in 2015.

Am I saying Tretter should have a shot at replacing Bulaga in the staring lineup? Well, since I know the Packers would never consider that, I won’t even bring it up.

What I will bring up is how bad Bulaga was in 2015. Coach Mike McCarthy has a ready-made excuse for his play, however.

“Frankly, Bryan was beat up this year. He didn’t have his best year. The key to your offensive line is those guys playing 16 games a year. When your line plays together that statistic right there will tell you a lot.”

Hell, isn’t the entirety of the line pretty much always beat up?

Some guys — Josh Sitton, T.J. Lang — play through pain all the time and you don’t notice significant drops in their play.

Perhaps that’s just because they were better players to begin with.

Pro Football Focus gave Bulaga the lowest grade — by a fairly wide margin — among the Packers’ starting offensive linemen in 2015.

Will a healthy Bulaga — if that’s even possible — be able to turn things around in 2016? We’re certainly going to find out. When you pay a guy that much money, he’s going to be a starter for your team regardless of his level of play.

Personally, I have my doubts we’ll ever see anything other than mediocrity from Bulaga.