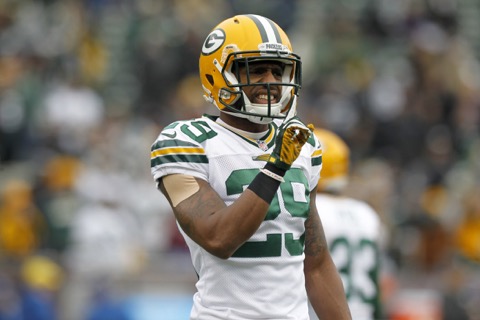 Cornerback Casey Hayward is arguably the most talented player among the Green Bay Packers’ free agents this offseason. Despite that, we unanimously believe Hayward will be playing elsewhere next season.

The reasons are simple.

First, the Packers have a ready-made replacement in 2015 second-round pick Quinten Rollins. As a rookie, Rollins actually did more in limited action than Hayward did as a full-time player.

Second, Hayward is going to get a substantial offer from someone. He may not be the boundary cornerback he thinks he is, but he’s a top-tier slot cornerback.

That could mean a deal similar to the one former Packers cornerback Davon House signed with Jacksonville in 2015 (four years, $24.5 million). That’s more than $6 million per season.

The Packers gave Sam Shields a contract that averages close to $10 million per season in 2014. We simply can’t see them investing $16 million in two cornerbacks when one of those cornerbacks is the third or fourth-best on the team.

That just doesn’t make any sense.

If there was a compelling argument for Hayward returning, it was made by Pro Football Focus.

One of the premier slot cornerbacks in the league, Hayward transitioned to starter in 2015 and did not disappoint. He was the Packers’ highest-graded cornerback in 2015 in coverage, and 21st-overall in the entire NFL. His traits won’t likely command as much money as Sam Shields, but he should be just below that range. Even with Hayward’s apparent heirs already drafted in Quinten Rollins and Damarious Randall, secondary is such a premium position that you can’t afford to bleed talent.

While we agree with most of that, we’re still not buying the idea that the Packers might re-sign Hayward.

From a personnel standpoint, there’s an argument. You don’t want to let quality players walk.

From a financial standpoint, there isn’t. No team can pay everyone and the Packers prepared for this exact scenario when they picked up Rollins, Damarious Randall and LaDarius Gunter last offseason.

Pretty simply, Casey Hayward is a luxury the Packers can’t and don’t need to afford.

Wait, So Don Barclay Has A National Ad Campaign?