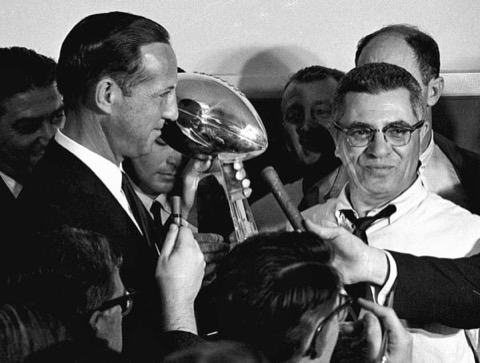 Super Bowl 50 is coming up and that means… well, it means it’s the 49th anniversary of the first Super Bowl, which was then known as the NFL-AFL World Championship.

So there’s a bit of reflection about the first Super Bowl, which, as we mentioned, wasn’t a Super Bowl at all.

It did feature the Green Bay Packers. They went to the Los Angeles Coliseum and beat the Kansas City Chiefs 35-10 in a game, that for many, was an afterthought.

It was an afterthought for a number of reasons.

At the time, the NFL was considered the superior league by pretty much everyone except those associated with the AFL. As far as most people were concerned, the match-up between the two best football teams on the planet had already taken place when the Packers beat the Dallas Cowboys 34-27 on the first day of January, 1967.

Packers coach Vince Lombardi was among them.

He didn’t let his feelings be known leading up to the game, but he let it fly after the game, as we were reminded by Deadspin, via the Los Angeles Times.

Lombardi considered the Chiefs — and the AFL — inferior and his post-game comments made that perfectly evident.

“I don’t think that Kansas City compares with the top teams of the NFL,” said the Green Bay coach.

“That’s what you wanted me to say, and I said it,” shouted Lombardi from a podium in the cramped Packer dressing room. “It [the statement] has been a long time coming out.”

Said what was on his mind and didn’t give a fuck.

As you know, the Packers would come back a year later and beat the hell out of the Oakland Raiders, the AFL’s best in 1967.

What this does is shed some light on is just how improbable the New York Jets’ win over the Baltimore Colts in Super Bowl III — then actually known as the Super Bowl — was.