The Price is Wrong, Bitch! 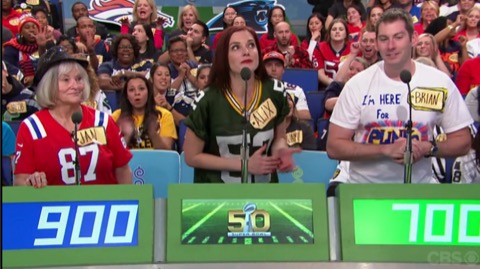 The Price is Right had a Super Bowl show Friday morning. What does that mean exactly?

Well, it means both the Super Bowl and The Price is Right are on CBS.

It also meant they made everyone in attendance wear NFL gear and they had a bunch of NFL-related prizes — like dual trips to Charlotte and Denver. The show also had former players Maurice Jones Drew and the treasure that is Ike Taylor hanging about.

The Green Bay Packers chick is Alix Legacy and yes, I know how to spell Alex, but Alix does not.

She’s from Laguna Nigel, which is in Orange County, not Wisconsin.

Alix won a car and made the Showcase Showdown, but overbid and lost herself a trip to the Super Bowl.

The important thing here is she looks good, though.

So yeah, the price was right, but I only think of Happy Gilmore when I think of The Price is Right.