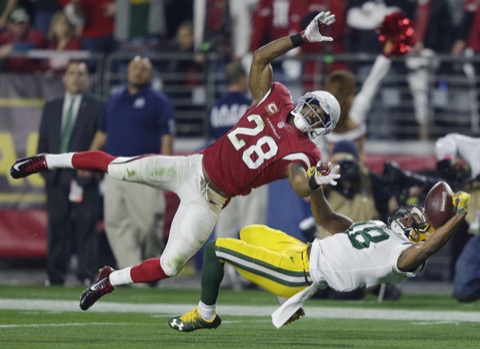 Green Bay Packers receiver Randall Cobb was making the media rounds in San Francisco on Wednesday and the main topic of conversation was the injury that prematurely ended his playoffs.

Cobb made a one-handed catch that was negated by a penalty early in the Packers’ loss to Arizona. He seemed fine, but the next time we saw him he was spitting up blood. Cobb suffered a punctured lung on the play and ended up spending the night in a Phoenix hospital.

Here’s how he described the injury to PFT.

“I was really worried,” Cobb said. “To be coughing up blood…I couldn’t breathe. I felt like I was choking. Then I went to throw up and I was spitting up blood.

“We went and did the X-ray and I thought I was fine. I thought it was a broken rib. But unfortunately it was a punctured lung. It was scary.”

Nothing really looked abnormal about the play, but the result certainly was and Cobb has an idea why.

When he stopped by Jim Rome (that’s still a thing?), Cobb noted that he was mic’ed up for the game and blamed the mic for the injury.

“The battery pack for the mic was on my shoulder pads. I landed flush on my back during the catch and I punctured my lung,” Cobb said. “There’s no way to prove that, but it’s kind of crazy that I punctured a lung without fracturing my rib.”

A fair assessment, although does that battery pack have spikes on it?

We’re not really sure.

However, it would be funny if guys stopped wearing mics during games because of this.

Obviously, Cobb has recovered from the injury just fine.