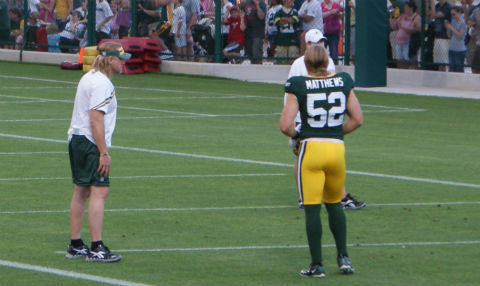 Kevin Greene abruptly left the Green Bay Packers and coaching in January 2014, just days after the team’s season ended at the hands of the San Francisco 49ers.

Greene, who coached the Packers’ outside linebackers from 2009-13, stepped away to spend time with his family. Now, the newly-elected Hall of Famer wants to get back in the game.

Greene has expressed interest in returning to the Packers. Unfortunately, defensive coordinator Dom Capers has already killed that possibility.

“I’m sure you’ll see Kevin at some point in time back in the league coaching,” Capers said. “There’s nothing available (with the Packers). That’s always (a big factor) in this business in terms of availability. But he’s a passionate guy. He did a good job for us in the five years he was here.”

Greene brought something to the Packers that no other coach on Mike McCarthy’s staff ever has.

His presence was refreshing, especially when compared to the dour, dull Capers.

We can only assume the Packers’ reluctance to bring Greene back is because either, A. someone is holding a grudge over his unexpected departure or, B. someone is worried about their job.