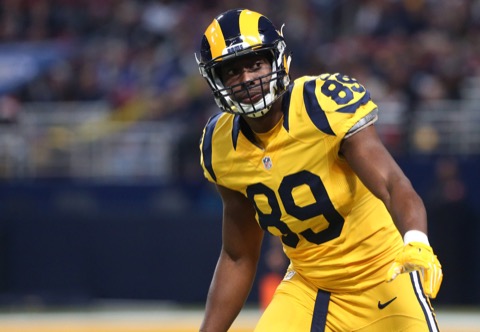 We’re all well aware of the Packers shortcomings at the tight end position in 2015. It stands to reason they’ll be looking for an upgrade in 2016.

We also know that Finley doesn’t think much of Richard Rodgers, the Packers’ de facto starter. When coach Mike McCarthy fired tight ends coach Jerry Fontenot following the season, Finley was quick to point to Rodgers as the culprit.

Is Cook the answer?

Those are declining returns for a guy that’s 28 years old. He did, however, play with some pretty bad quarterbacks in 2015 (Nick Foles, Case Keenum, etc.). Even then, his 12.3 yards per catch was substantially better than Rodgers’ 8.8.

General manager Ted Thompson has historically only been interested in the draft. Despite the internal strife that bubbled to the surface in 2015, we will only believe Thompson has adapted his roster-building strategy when we actually see him do something different.

Is this something different?

What’s the common thread there?

With the exception of Peppers, all of those players came cheap and as is usually the case when you buy something that’s cheap, you get what you pay for.

Guion and Peppers are the only two to make a significant impact and most of the players on that list didn’t even make the team.