James Jones Tells the Story of the Ring in the Bread 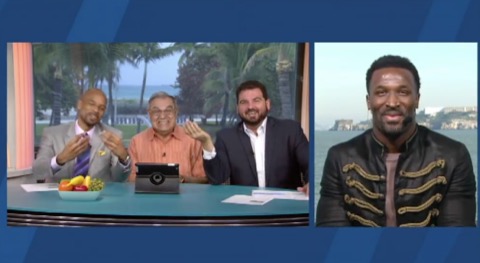 Man, James Jones… we’re going to miss this cat if, as expected, the Green Bay Packers don’t re-sign him.

Jones was on Highly Questionable Wednesday morning. He talked a lot about growing up homeless, but then told the story of how he proposed to his wife.

He put the ring in the bread basket at Red Lobster.

“My wife is a big, big fan of Red Lobster. She loves the bread there. Loves the biscuits. So I went the day before, gave them the whole setup of how I wanted them to put the box, the ring in the bread. So when they brought the bread out, she took her gum out of her mouth and was ready to eat all seven biscuits that was in the basket and she opened it up and the ring was there and I was already on my knee,” Jones said.

This provoked some hearty laughter from the show’s hosts, but James Jones was just like, “What?”

Watch the whole segment here. The proposal story is at the end.