by Vaden Todd
in Uncategorized
9 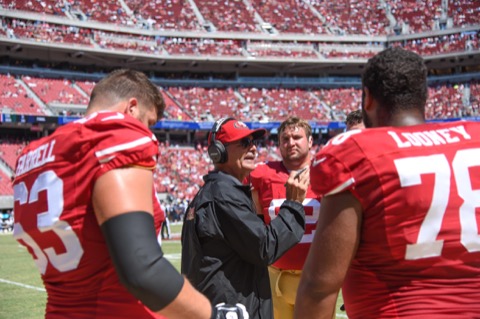 Mike Solari isn’t a name many Green Bay Packers fans know or care about. That’s because he was with the team as an assistant offensive line coach for just one season. Solari officially became the new offensive line coach of the New York Giants on Tuesday, when Ben McAdoo unveiled his first staff.

Why should you care?

Well, we’re happy to enlighten you.

Packers coach Mike McCarthy started the offseason by firing two assistants — running backs coach Sam Gash and tight ends coach Jerry Fontenot. They were fired not so much because they did a bad job, but because there were two better options available. Two guys, in Brian Angelichio and Ben Sirmans, who had track records of getting something out of nothing.

Meanwhile, the Packers have been harboring an offensive line coach in James Campen who’s never been known to get something out of nothing. Not only that, but Campen’s unit was an utter debacle in 2015.

Gash coached the 10th-ranked rushing attack in the NFL in 2015 and he still got fired. Meanwhile, Campen’s guys went out and looked like the Keystone Cops and he’s happily employed.

And that may not be a big deal, except the Packers already had a more accomplished offensive line coach on staff and they just let him walk away.

Solari coached the San Francisco 49ers offensive line from 2010-14. The 49ers had one of the best lines in football during that period.

So again, McCarthy demonstrates that not everyone is held to the same standard. That he governs on the whims of the day.

A clear message was sent when the Packers fired Gash and Fontenot. If we feel we can improve our coaching staff with better personnel, we’ll make a change.

The Packers have since sent the opposite message on two occasions.

So what is the message now?

We’ll make changes to the coaching staff, but only when we need to scapegoat someone. Otherwise, it’s just status quo as usual.

Aaron Rodgers Returns, Gets Fired Up About HOF Game